Behnisch Architekten has completed an office and reception building that looks like a sports arena at the Adidas headquarters in Herzogenaurach, Germany.

"The newly constructed building looks like a soccer stadium and has space for more than 2,000 employees," said Adidas.

Although Adidas believes that the building looks more like a stadium than an office block, this was not the architecture studio's intention.

"We didn't design the building as a football stadium; it incorporates other functions. The architecturally relevant aspects were tied in with considerations of space," explained Stefan Rappold, partner at Behnisch Architekten.

"We came up with a very special concept for the entrance area, prompted by the wish to create a unique and atmospheric sequence of rooms," he told Dezeen.

"The fact that the client has associated the new building with sports facilities is great, but that was not our initial intention."

"The idea is that there should be nothing to remind you of a traditional building," explained Rappold. "The number of stories, the windows, and the facade's vital functional details should all be impossible to identify, with a low profile in visual terms."

The regular-shaped office floors are clad in a repetitive steel sunshade, which creates shade and adds to the building's arena aesthetic.

"The facade is certainly unique, and its formal design qualities will be a landmark feature adding character and definition to the Adidas brand in architectural terms," said Rappold.

"However, the development of the facade design was driven primarily by functional parameters: as a fixed source of shading, whereby each facade was individually planned according to its aspect and the position of the sun."

The building's main entrance is on the ground floor, which leads to a large atrium with a ceremonial staircase that run up through the building. A restaurant, meeting rooms and conference facilities occupy the rest of the ground floor. 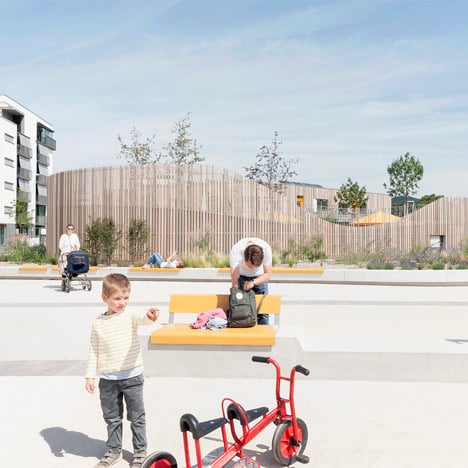 "The self-supporting staircase in the central atrium is thus more than a functional set of steps; it is a place where people can meet and communicate, offering exceptional views from various elevations down to the foyer and out through the open-air level onto the campus," added Rappold.

Behnisch Architekten was founded in 1989 by Günter Behnisch, with his son, Stefan Behnisch, taking over leadership of the studio in 1991.

The firm has previously completed the renovation of the business school at Portland State University and a timber-clad kindergarten in the German city of Heidelberg.

Photography is by David Matthiessen.