The Netherlands could build a million new homes from sustainably harvested local wood and save 100 megatons of carbon in the process, according to architect Marco Vermeulen.

The Dutch architect has calculated that the country's 140,000 hectares of harvestable woodlands could provide enough timber for 22,000 houses each year. This means the country's entire shortfall of a million homes could be met within 45 years without using concrete or steel, which contribute to climate change.

"You could grow 60 houses every day in those 140,000 hectares," he said. "That means you can harvest every year 22,000 houses on Dutch soil. That means it would take about 45 years to build the whole million houses."

The timber would lock up 45 megatons of carbon dioxide but the total benefit would be 100 megatons, since building out of concrete and steel would lead to emissions of 55 megatons, he argued.

The architect made the comments during a talk about circular architecture hosted by Dezeen at Dutch Design Week on the weekend.

Switching to timber housing "could be an enormous motor, a catalyst for the bio-based economy and a chance for our climate", he said.

Vermeulen specialises in timber architecture. For Dutch Design Week he designed Biobasecamp, a temporary wooden structure that housed an exhibition about building with trees.

He has designed Dutch Mountains, a proposed skyscraper development for Eindhoven made of cross-laminated timber (CLT). 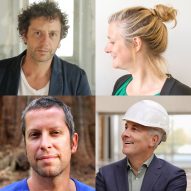 Rau is the co-author of the book Material Matters, which he wrote with Sabine Oberhuber. He is also the founder of Amsterdam-based RAU Architects.

Earlier this year, the studio completed a timber bird-watching pavilion for the Scheelhoek Nature Reserve in the Netherlands, which can be dismantled and re-assembled in other locations.

Overtreders W applies the circular economy model to all of its projects. In 2017, the practice teamed up with Bureau SLA to develop the People's Pavilion for Dutch Design Week. The main structure of the pavilion was made of borrowed timber.

The Netherlands has 365,000 hectares of forest. Of this, 225,000 hectares are protected, but the remainder is formerly productive woodland planted for the match and clock-making industries.

"I think we could reuse them reactivate them again for actually producing wood on Dutch soil," said Vermeulen.

Architects speaking at the Architecture of Emergency summit in London last month called for timber to replace concrete, which is one of the biggest causes of greenhouse gases.

"Stop it with the concrete," said Maria Smith, founder of architecture studio Interrobang and co-curator of the Oslo Triennale 2019, who gave a keynote speech at the summit.