Designer Irakli Sabekia has developed a device that can turn the border fence between Russia and his native Georgia into a radio transmitter.

Using the fence as an antennae, the specially tuned transmitter broadcasts the names and coordinates of villages that were erased during 2008's Russo-Georgian War, in Morse code.

"Stating the names of the cities, and placing them on their proper locations forces the fence to voice what it's meant to hide," explained Sabekia, who was born in a town that now lies behind the occupation line.

According to the designer, Russia's presence in the provinces of South Ossetia and Abkhazia destroyed many villages and many nationally-important buildings.

"Behind the razor wire fence, Georgian villages are deliberately burned down, demolished, and then even the ruins completely removed from the area," said the designer.

"In an attempt to rewrite history, the traces of the population in this area were completely erased. The fence keeps being moved further into Georgian territory, trapping more than 30 more villages since the war. "

This, Sabekia explained, keeps the country in a constant state of fear. Design was the only way he knew how to cope with it.

"If I'm faced with this overwhelming force, it's true that I can't control it," he remembers thinking. "But maybe I can mine it. Maybe I can tap into it, in some way and use its energy against itself."

And so the idea was born of turning the razor-wire fence, the weapon used to enforce the occupation, against itself.

"I started examining it just as a metal structure in the landscape, looking for properties that I could use to my advantage" he explained.

"And in my research, I came across an image of a beautiful old radio tower and it immediately sparked a question – if this structure can be used for communication, why can't the wire do something similar?"

At the moment, the transmitter is being presented as part of Sabekia's installation Voicing Borders, which also includes a series of projections, showing satellite images of the South Ossetia region. 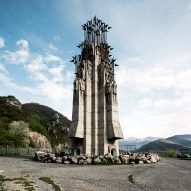 "The project started with a long research phase, in which I tracked down archive satellite images and mapped the location and structure of 16 disappeared villages," the designer remembered.

"They are located in the area occupied during the actual conflict in 2008, but the process of their destruction stretches over several years after that, from 2009 to 2016, and is repeated with a recognisable pattern."

Sabekia allows visitors to explore this evidence via an interactive installation, which shows bird's eye views of empty landscapes.

However when standing in front of the projections, the shadow cast on the wall reveals the villages that used to stand in those places – the same ones whose coordinates are sent out via the radio transmitter.

To Sabekia, his work is far from done: "Since I presented my installation to the public first time, I found four more erased villages in the areas occupied during the conflict so I'm currently working on mapping their structure to include them in the installation."

Other notable projects from the event include Micheline Nahra's deconstruction and reconstruction of a dining set in a bid to make absence visible, as well as Dorian Renard's collection of hand-blown plastic furniture and sculptures.