Design firms Bloco Arquitetos and Equipe Lamas used a mix of warm and cool materials in their refurbishment of a visitor centre in Brasília, designed by the late architect Oscar Niemeyer in the 1960s.

The project, called the Revitalisation of Oscar Niemeyer's Tea House, is located in the planned city of Brasília, which is the federal capital of Brazil. Established in 1960, Brasília features a number of modern-style buildings designed by the late architect Niemeyer.

The Tea House sits within Praça dos Três Poderes, or Three Powers Plaza, and serves as a tourist information centre. Partially sunken below ground, the 250-square-metre building has glazed walls and an overhanging, white roof.

The building, which opened in 1966, has undergone various changes over the decades. Local studios Bloco Arquitetos and Equipe Lamas were hired to refresh the interior in a way that was sympathetic to the original design.

"The goal was to restore Oscar Niemeyer's project – honouring the past and furnishing the space with contemporary pieces that connect with the capital's aesthetic and modernist spirit," the team said.

When it opened in the 1970s, the building was intended to serve as a place for meetings and rest. It was abandoned at some point due to political complications and the lack of a tenant, according to the architects.

In 1994, it reopened as the Tourist Assistance Center, but it was closed six years later due to concerns over a potential roof collapse. After structural modifications, the centre reopened in 2010. 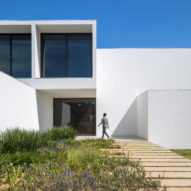 In recent years, the Secretariat of Tourism and Unesco hired Bloco Arquitetos to revitalise the space. Architect Samuel Lamas, who co-leads Equipe Lamas, was chosen to design the furnishings.

The team freshened up the white marble floors and walls. Window frames were cleaned, and ceilings and pillars were repainted using colours from the original design.

The furnishings, all by Lamas, are meant to complement the architecture. Black iron is paired with warm materials such as wood and leather. Hues of peach, yellow and tan lend a softness to the atmosphere.

A space reserved for showing maps and books was fitted with a Caroline table, João chairs and a Carlos shelf.

Overall, the furnishings are meant to look light and streamlined, while being sturdy enough to handle daily visitors.

"The use of geometry and pure forms are explored in the products," the team said. "With simplicity and architectural reasoning, the furniture has delicate metallic profiles that reach the maximum lightness without compromising the functionality."

Other projects in the Brasília area include a dwelling by Samuel Lamas that features ample glazing and numerous gardens, and a house by Bloco Arquitectos that consists of rectilinear, all-white volumes that push outward and pull inward.