ShareCuse is a 3,200 square-foot (297 square-metres) shared office space located on the first floor of a historic office building.

Its open-plan workspace, seven private offices, conference room and telephone booth were designed to accommodate up to 25 people.

The architects attached black-painted aluminium square tubes to plastic mesh screens to create partitions between workspaces in place of half walls traditionally used in office environments. The net-like screens conceal the interiors from a distance and become more translucent up close.

"Drawing from the edifice's rich 90-year history as an office building, and research into a range of workspace typologies, the design for ShareCuse explores, expands, and reinvigorates the notion of a cubicle," Architecture Office said.

"We were interested in understanding how we could interrupt the traditional repetition of the cubicles without subdividing them, as well as encourage connection and the relationship between singular and shared office spaces," it added.

Housed inside each frame are four individual workspaces. They are separated by seven-foot-tall (2.1-metre-tall) openings that create opportunities for workers to easily engage with one another, pass information or share desk space.

"By grouping the cubicle structures into quadrants, we imagine workers moving around the objects and interacting within the shared office landscape," said co-principal Nicole McIntosh. 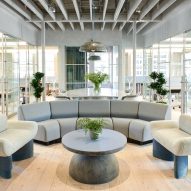 The placement of the cutout at each grouping was shifted slightly to generate "variety and different interaction with their surrounding spaces."

Each table is equipped with a custom-made metal conduit desk lamp, which are accented with a gold-tinted light bulb and an outlet switch.

Exposed concrete from the existing interior was left on the ceiling and floors. Pink, blue and grey chairs, accented with brass legs, decorate the lounging spaces. Circular dark grey rugs cover the floor in these communal seating areas.

Other furnishings in the co-working space include a 30-foot-long (9.1-metre-long) kitchen counter faced with a matte black laminate. Built into the island are 16 storage lockers, shelving, refrigerators, sink and dishwasher.

Architecture Office was founded by Nicole McIntosh and Jonathan Louie. It has offices in Texas and Switzerland.

Creatively designed co-working spaces are popping up in cities all over the world. Other projects in the United States include Canopy workspaces by Yves Behar and Amir Mortazavi, which recently opened its third outpost in a historic San Francisco building and The Wing, a co-working club exclusively for women with spaces in Chicago and several offices in New York City.