A hidden corridor beneath a grass hill links the metal-clad volumes of this house and cooking school in the Netherlands by architecture firm Mecanoo.

Called Villa Vught, the complex draws on the traditional Dutch hoeve, or homestead, with buildings arranged around a central open space.

The functions of Villa Vught have been split between the project's three forms, two of which are shaped to look like elongated farmhouses.

A third, larger form is reminiscent of the base of a windmill.

The open space in the middle is covered with paving and gravel around planted beds, and connects to a circular pathway that encircles the whole site.

A hidden corridor covered by a grass mound links the living spaces with the bedroom, so the occupants don't have to go outside to move between the residential areas.

Anodised aluminium cladding the colour of dark bronze covers the buildings, extending seamlessly from the elevations to the roofs.

This material was chosen for its resemblance to the corrugated iron roofs of nearby farm buildings.

Each building was constructed using a cross-laminated timber (CLT) structure, with interiors finished in European silver fir, chosen by the studio for its sustainable qualities. 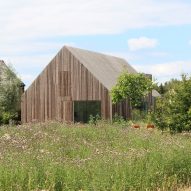 Cowshed in the Netherlands rebuilt as a timber-clad family home

All of the bedrooms occupy the larger volume, while one of the barns houses a large living, kitchen and dining area and the other is occupied by the culinary school and a garage space.

At the end of the living barn, the lower floor has been cut out to create a terrace space covered by the floor above.

At the top of the largest volume an open roof terrace is surrounded by a high parapet.

Windows, which are framed in a lighter bronze finish, have been carefully positioned to capture views of the landscape "like picture frames adorning the walls with selected images of the surrounding farmlands," said the studio.

Mecanoo was founded in 1984 by architect Francine Houben and is based in Delft, and recently completed a vast, red cultural centre in China.

Another house that takes aesthetic inspiration from its agricultural setting is The Potato Shed, a gabled family home clad in timber slats as a nod to the barn that used to sit in its place.