Anthony Hunt worked with architects Norman Foster, Richard Rogers, Michael and Patty Hopkins and Nicholas Grimshaw to engineer some of high-tech's greatest buildings. We continue our high-tech architecture series with a profile of the influential engineer.

High-tech architecture's pioneers had their stylistic differences, collaborations and contestations, but they can almost all be united by a single thread: the structural engineering practice Anthony Hunt Associates (AHA) and its founder Anthony – better known as Tony – Hunt, the "architect's engineer".

It was perhaps inevitable that modernism's preoccupation with technology would foster a dissolution of the boundaries between architecture and engineering, as figures such as the architect/engineer Owen Williams and designer Jean Prouvé demonstrated.

Britain's high-tech style was borne of this lineage, but it also pushed these ideas much further.

Here was a way of building that was clearly obsessed with the way in which the components of a building were put together, but also one that was interested in the proposition of radical new systems of building. It blurred architectural and technical concerns and in doing so blurred the architect and engineer's professional boundaries.

Above all, Hunt, along with other engineers of the period including Peter Rice, helped to challenge the traditional view of the architect-engineer relationship. No longer was the engineer just an enabler of the architect's ideas, but they could be a pivotal part of the design process from conception to its completion.

Within this context, AHA was one of what is often referred to as the big three engineering practices, along with Ove Arup & Partners and Buro Happold. AHA was by far the smallest, and this small size was matched with an incredibly open approach to new projects – Hunt claims the firm never turned down an invitation to be involved in a competition entry.

Hunt was born in London in 1932, and in true high-tech fashion model airplanes (he claims to have designed one himself from scratch) and Meccano are cited as early interests. After studying engineering at Westminster Technical College, Hunt began an apprenticeship at a firm in the City of London, Wheeler & Jupp.

Hunt was quickly disappointed with this first placement – "the work was routine and his colleagues and employers uninspiring", wrote historical Angus Macdonald in his account of AHA. After visiting the Festival of Britain he was so inspired by its architectural vision that he considered a career shift to a profession that seemed to be having a far more exciting moment: architecture.

His father would persuade him otherwise – something Hunt has said he does not regret. After all, the festival presented its fair share of engineering marvels, and so Hunt applied to work for the engineers of the Festival's otherworldly Skylon structure: FJ Samuely and Partners, the practice of Frank Newby and Felix Samuely.

This would prove a pivotal moment in Hunt's career. Newby and Samuely were some of the 20th century's most influential structural engineers, working with the likes of Powell & Moya, Eero Saarinen (one of Hunt's earliest projects at the firm was on the US Embassy in London), James Stirling and, perhaps most importantly to the burgeoning scene of high-tech, Cedric Price.

Working with FJ and Samuely and Partners not only provided an introduction to London's architectural scene – at the time centred around the Architectural Association – but also figures such as Charles and Ray Eames, Buckminster-Fuller, Jean Prouvé and Konrad Wachsmann.

On a more practical level, when Hunt chose to found his own practice of Anthony Hunt Associates in 1962, Newby – inundated with commissions – provided AHA with work that enabled it to survive in its early months.

One of these was a project for a student accommodation building at Leicester University with practice Castle, Park, Dean and Hook. While subsequently abandoned, it was an early example of one of Hunt's patented "off-the-peg" solutions called "structair", which saw hollow beams and columns being used to run services through.

These early projects led to a steady stream of work that saw the practice grow, moving into a three-storey building in Covent Garden in 1963. With Hunt's staff not yet large enough to fill this space, areas of it were let out, one in particular to a figure who would change AHA's fortunes: the young architect Neave Brown.

Hunt and Brown's paths had already crossed during Hunt's time working for FJ Samuely and Partners, but what would see Brown become the "godfather" of AHA was his role in commissioning AHA to work on the Alexandra Road Housing Estate in London. Led by chief architect at the London Borough of Camden Sydney Cook, this project would help bankroll AHA through the 1970s.

Cook not only bravely chose young architects to bring new ideas to the department's projects, but he also chose young engineers.

At the time, Alexandra Road was the largest project AHA has attempted, using reinforced concrete cross-slab walls. But while AHA's engineering was more than competent, the focus was, and remains, on the architecture rather than the engineering.

It was also allegedly Brown who introduced Hunt to Richard and Su Rogers at a dinner party, who at the time had recently formed Team 4 with Norman Foster and Wendy Cheesman.

The environment of Team 4, writes Angus Macdonald, was "the kind of design environment Hunt had been looking for", with a group of enthusiastic designers discussing new structural solutions that meshed perfectly with Hunt's previous work.

While Hunt worked with Team 4 on their earliest works, such as Creek Vean and Murray Mews, it was in their last project, the Reliance Controls factory, that their collaboration would produce the sleek, exposed structure that would come to define the work of AHA.

Hunt's early projects had often involved more concrete than lightweight metalwork, but it was the efficient use of standard components, often combined with ingenious junctions and hinge joints, that would come to define the architecture practices the studio collaborated with.

Macdonald claims that "it is arguable that Foster and Rogers could not have achieved their success without Hunt and there is no doubt that, in their early years in practice, they benefited greatly from his abilities".

After Team 4's split, as its members gradually drifted towards their own particular ideas of high-tech from the mass-produced and modular to the incredibly bespoke, Hunt's practice was never far away.

The practice would work on both the less-high profile building systems and the architectural icons such as the Sainsbury Centre, International Terminal at Waterloo station and the Eden Project.

In 1971 Hunt worked on the IBM Pilot Head office with Foster, a project which saw the crystallisation of designing with mass-produced components in the creation of a simple yet hugely effective post and lattice beam structure.

These ideas would be pushed further in Hunt's work with Michael and Patty Hopkins, including their Patera Building System but also its earlier iteration of SSSALU (short span structures in aluminium) that saw a shared interest in yacht and furniture design lead to extruded aluminium structures connected with rigging elements.

Echoes of this thinking would appear elsewhere: most directly in the 1985 Schlumberger Research Centre by Hopkins Associates with its mast-like vertical elements. But also, in a series of lightweight frame structures designed with architect John Toovey at London Zoo and at the 1982 INMOS microprocessor factory by Rogers.

The apex of these collaborations came in the design of the International Terminal at Waterloo station with Grimshaw. The project saw high-tech design absorbing the emerging technologies of computer-aided design and weldable cast steel to deal with the challenge of creating metal trusses on a complex, curved site. 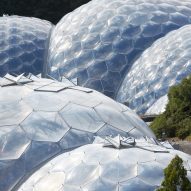 While Waterloo station was underway, AHA took the decision of merging with the YRM group – a multidisciplinary group of architects and engineers, with the company becoming YRM Anthony Hunt Associates.

Many took the view that Hunt's more nimble, collaborative working style did not suit such a large corporate venture. The partnership did produce several key projects – including an unsuccessful entry for Heathrow Terminal 5 and Benson and Forsyth's Museum of Scotland in Edinburgh – but was described by Hunt as "a lean period in terms of interesting buildings". When YRM failed in 1997, AHA was able to continue relatively unscathed.

The later work of the practice continued with designs for new terminals at Madrid and Bristol airports, as well as work on the firm's first stadium project at Don Valley in Sheffield.

But it was another collaboration between Grimshaw and Hunt that saw the creation of another high-tech work, the 2001 Eden Project, a series of ETFE domes with a lightweight galvanised steel framework that harked back to some of Hunt's earliest lightweight metal propositions.

Hunt would retire a year later in 2002, and in 2004 Australian firm SKM took over Anthony Hunt, becoming SKM Anthony Hunt.

While his legacy is no doubt seen in the projects completed over four decades alongside other pioneers of high-tech, it is AHA's unseen and often under-acknowledged redefining of how architecture and engineers can work together that has left a lasting impact – and has rarely been surpassed since.

High-tech is an architectural style that emerged in the UK in the late 1960s. Taking advantage of advances in structural engineering, high-tech architects emphasised structural elements as well as services and features such as lifts and stairs that are usually hidden within buildings.