Located in the city's Canal Saint Martin district, the 120-square-metre space is the brand's first ever physical store.

The store's facade has thus been kept deliberately simple. Its large glass window reveals a chalk-white, cave-like interior that looks as if it has been carved out of stone. The brand's name and logo are engraved into the top of an archway that frames the entrance door.

Inside, furnishings and design objects are displayed along the store's smooth walls, set within alcoves or placed on top of plinths which curve and blend into the walls and floors.

A carefully designed lighting system ensures that each alcove and plinth is bathed in what Moustache describes as a "solemn, almost mystical light".

The blue checkout counter has also been cast in polished concrete to fit with the cave-like aesthetic.

Further into the store, a bright-orange system of rails snake across the ceiling, through a door and into a back room.

Here there is a system of hanging swing trays, ladders and panels showcasing the brand's collections of wallpaper, textiles and statement objects in a moveable display.

There is also a terracotta-coloured shelving system that runs along one wall. 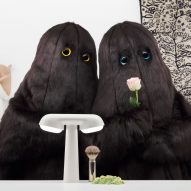 A large, white sliding-door has then been suspended from a rail in the room to take customers through to a dark and intimate alcove that contrasts with the rest of the white store.

Other items on display in the store include design objects that the brand says are never or seldom found in France, as well as rare and precious pieces which have been crafted over the last 30 years.

"Opening a store in town at a time when the internet has started to change the deal in the distribution of consumer goods may seem anachronic," explained the brand.

"Over the last 10 years, we have observed our users and realised that the nature of the objects we sell requires a special approach and a physical relation," it continued.

"It also seemed important to provide a place where these objects live and exchange together to form a single harmonious family."

From January 2020, the store plans to host a cultural event every two weeks, exhibiting the work of designers and artists from all over the world.

Previous creations by Moustache include ceramic plates designed by Constance Guisset that have the illusion of being soft and malleable, and a lamp by Ionna Vautrin that's based on the lights originally made for passenger cars in France's SNCF TGV L'Océane trains.

Photography is by Mario Simon Lafleur.