Goldsmiths student Nicholas Bennett has created waterproof footwear for commuters, that can be integrated into a suit to protect it from the floods that might become our daily reality due to climate change.

The project imagines a future where the effects of rising sea-levels have become so inescapable, that solutions need to be integrated into our everyday products.

In this case, that involves waterproofing office-appropriate brogues by merging them with wellies and adding fluorescent orange waders.

These can be unfurled to groin height to keep the suit trousers dry or tucked away under their hem when not needed, with laces on the sides used to hide the shoes' bulky form.

"I cut the soles off a pair of old brogues and pulled the rest of the shoe over the top of the wellies," Bennett told Dezeen.

"I wanted to use simple tools which most people would have at home, just like in the Protect and Survive videos from the late '70s that taught people what to do during a nuclear fallout with basic items like bin bags and suitcases."

In a bid to make do with existing resources and avoid the environmental impact of virgin materials, he used only reclaimed second-hand items.

"The plastic I used for the waders is from an old survival bag. This offers protection from the elements and is bright enough to call attention to yourself in case of an emergency," Bennett explained.

"I bought the brogues from a charity shop and made the holes for the laces from scraps of fixing band that is used for plumbing."

The project is presented via a short film, in which a fictional corporate worker embarks on his daily commute, folding up his neatly ironed suit trousers and pulling the orange plastic over the top before wading through the knee-deep water.

An extended version of the video also features another of Bennett's designs – an umbrella that can be inverted to become a funnel for collecting rainwater.

This allows workers to maintain the daily ritual of making a cup of tea in a future where tap water might be unavailable but rain is in abundance.

Bennett is originally from North Yorkshire, an area of the UK that has been hit with flash floods this year because of rising river levels and torrential rainfall.

"My grandparents live within a couple of metres from flood plains and my family was having to deal with all the 'what ifs'," he remembered. "I think looking back I saw flooding as a temporary issue, which is exactly the problem because we just try to fix it with temporary measures." 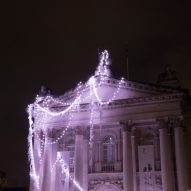 With his design, Bennett wanted to confront the magnitude of the problem head-on, while showing that it's possible to work with what we already have.

"Climate change can seem so entrenched and immovable," he explained. "So I like the idea of design reminding people that things aren't fixed. An umbrella or a suit doesn't have a single purpose."

"These items are small-scale, but if design can loosen the concept of an everyday item, it can potentially start to open out and shift mindsets. Imagining the future can be a catalyst for re-thinking our behaviour," he continued.

It was organised by artist management agency Art Partner to mark this month's UN Climate Change Conference in Madrid.

The conference also saw a number of climate-focused public artworks set up across the city, including Michael Pinsky's Pollution Pods installation, which simulates the air quality of different cities around the world.

Artist Lorenzo Quinn meanwhile built on his contribution to the Venice Art Biennale – an installation featuring six pairs of gigantic stone hands – to create a new piece featuring two such hands emerging from the water and appearing to prop up a building to save it from collapse.