A lockable wardrobe and twin-sized bed figure in this modular sleeping unit, which was conceived by architecture firm Perkins and Will in response to the homelessness crisis in Los Angeles.

The prefabricated Dome unit is meant to offer a heightened level of privacy for people staying in temporary housing facilities. US homeless shelters typically contain rows of beds in open rooms, with limited to no storage space.

The unit was designed by Perkins and Will's LA studio in response to a city initiative called A Bridge Home, which is focused on creating emergency shelter for homeless residents. Launched by LA Mayor Eric Garcetii, the programme describes homelessness as "the greatest moral and humanitarian crisis of our time".

LA intends to create 1,600 new beds throughout the city, along with replacing many existing beds.  The Dome system responds to "the urgent need for specialised furnishings that can be rapidly deployed at a low cost", said Perkins and Will in a project statement.

The pod is seven feet wide by six feet deep (2.1 metres by 1.8 metres), forming a space that totals 42 square feet (3.9 square metres). Each contains a lockable wardrobe, a standard power outlet, and a frame for a twin bed. An optional fabric canopy can be used to cover openings, helping increase privacy.

The pods are designed to be slid up against a standard drywall partition, which supplies the electrical connection. Recessed lights are integrated into the exterior of each unit, providing soft illumination at night.

The design calls for using solid surface panels – a Corian-like product – to create the pod's shell and internal shelving. Birch plywood would be used for the wardrobe door.

"Solid surface is low maintenance and resists scratching, while wood accents give the unit a residential character," the team said.

The pods are designed to be collapsible, making them easy to store and transport. A typical 53-foot (16-metre) flatbed truck can fit up to 32 units, according to the team. 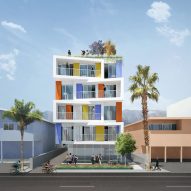 The estimated cost to build one unit is $4,749 (£3,564). Shield, a solid surface fabricator in Missouri, would manufacture the units.

The Dome unit was created as part of Perkins and Will's Innovation Incubator, a programme that offers micro-grants and other forms of support to employees with novel ideas. The design was informed by extensive research, including meetings with fabricators, community members and facility operators.

"To better understand the landscape of interim housing, the team spent months visiting facilities to understand how they work – from registration, to intake, programming and placement in permanent housing," the architects said.

The team found that sleeping areas and storage space were top concerns among stakeholders. In many facilities, these elements were made of sheet metal and steel bars.

"We quickly realised that unlike in healthcare, workplace or higher education markets, there wasn't a whole lot available for providers to choose from that was specifically designed for interim housing," said Yan Krymsky, a design director at Perkins and Will's LA office.

The Dome unit could have been a "utilitarian box", but the team wanted to create a sleeping space that felt pleasant and dignified.

"We want it to feel residential, not institutional," said Krymsky. "It sends a message that people care."

A number of Los Angeles studios are working to address the city's homelessness and affordable housing problem. Brooks + Scarpa recently unveiled a low-cost housing complex design called Nest, which consists of prefabricated, modular units that can be arranged in different configurations.

The firm LOHA has proposed or completed a number of affordable housing projects, including MLK1101, which was named housing project of the year in the 2019 Dezeen Awards. The residential complex is designed for low-income tenants, military veterans and people who are chronically homeless.

Images are by Perkins and Will.