Two Zurich-based graduates have created a low cost lower-limb prosthetic made of recycled plastic waste that is collected and processed in local factories in Kenya.

Project Circleg was founded by industrial design undergraduates Fabian Engel and Simon Oschwald at Zurich University of the Arts in March 2018 as a degree project.

The two designers wanted to find a way to help the millions of people in less developed countries who need a prosthesis because of traffic accidents, poor medical care or armed conflict.

Most prosthetic limbs that are currently available tend to be lacking in functionality or are unaffordable to many who need them.

Without access to them, many individuals are confined to their homes, are dependent on others for help and live fairly excluded lives.

Alongside this need for prosthetic limbs, Oschwald and Engel wanted to address the issue of plastic pollution in less developed countries, where it is particularly high due to lack of recycling resources.

"As industrial designers, we see plastic waste as a valuable resource for meaningful products. So we came up with the idea to combine the topics of plastic pollution with the high demand for low-cost prosthetics in developing countries," said Engel.

They chose to use this post-consumer plastic to fabricate the Circleg, reducing the material cost by half and utilising locally available plastic waste for production. The recycled plastic is reinforced with glass fibre to increase the stability.

Oschwald and Engel went on a trip to Kenya during the prototyping phase to research the current recycling processes and to observe the lifestyle requirements of their potential users.

"This user-centred approach enabled us to integrate the needs and requirements of those affected into the design process," said the designers. "Subsequently, we designed and developed a prosthetic solution tailored to the Kenyan context." 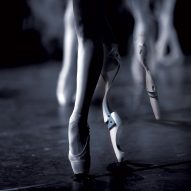 The production of Circleg is based around the capabilities of existing manufacturing and recycling processes in countries such as Kenya where it will be implemented. Local production and fitting of the Circleg also creates jobs and income in communities.

"With Project Circleg we aim to establish a local value chain in the respective country," said Engel. "The local recycling, production and assembling of the Circleg prosthetic solution creates jobs that can secure an income for some people and their families."

The Circleg is designed to be highly functional and to adjust to the needs of an individual user's body. The colour is also customisable.

"We discussed ideas with amputees and the idea of an ankle joint was one of the outcomes of the co-creation," explained Engel to Dezeen.

"The ankle joint allows a squatting position and, thus, the use of a squat toilet. This is a very important aspect in many developing countries since they mostly use squat toilets. With existing solutions, amputees had a hard time using this toilets."

The leg is currently under development Kenya with the intention of being ready for use and distribution after the prototype has been tested.

Pratt Institute graduate Jae-Hyun An has also recently created a prosthetic leg that allows amputees to perform ballet like never before.