Sony revealed a driverless, electric concept sedan at this year's Consumer Electronics Show, designed to flaunt the Japanese company's expertise in a range of mobility technologies.

Unveiled on 7 January 2020, the electronics giant created the Vision-S prototype vehicle as a way of showcasing its advanced electronics technologies that aim to contribute to "safer and more reliable autonomous driving".

A total of 33 sensors are embedded into the car – 13 more than Tesla's Models S and X – which are used to detect and monitor the presence of people and objects both inside and outside the vehicle.

These include its imaging and sensing technologies, as well as on-board software regulated using Sony's artificial intelligence, telecommunication and cloud technologies.

"It's not an exaggeration to say that mobile has been the mega-trend of the last decade. I believe the next mega-trend will be mobility," said Sony CEO Kenichiro Yoshida as he revealed the concept vehicle.

Sony described the electric car as the first prototype to result from its new "initiative", called Vision-S, which will be used to display its developments in the area of mobility.

The prototype sedan was presented alongside other technologies being developed by Sony in its booth at this year's Consumer Electronics Show (CES) in Las Vegas, Nevada, which is taking place from 7 to 10 January. 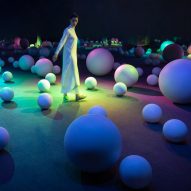 Other safety features include sensor fusion technology, meaning the data is derived from different sources, and Time-of-Flight (ToF) in-cabin sensors that can detect and recognise people and objects inside the car.

The car also incorporates an array of electronics technologies that aim to offer comfort and an "unprecedented in-car entertainment experience".

Sony hopes these features will help it "get closer to creators and users" by allowing them to "deliver reality".

This includes a panoramic screen spanning the dashboard and the company's 360 Reality Audio, which provides an immersive audio experience via speakers built into each seat.

Sony, however, didn't confirm whether it had any plans to put the car into production. For the time being, the Vision-S acts as a demonstration of the firm's electronics capabilities.

Canadian company Knectek Labs also showcased an automated product at this year's CES. The Townew bin uses heat to seal its own rubbish bags, as well as automatically replace them with a new one.