The striped patterns on Monika Dugar's Reset clothing collection are not just for aesthetic impact — they're meant to aid mobility in people with Parkinson's disease by "resetting" the brain.

A recent graduate of the London College of Fashion, Dugar was inspired to design the collection for her final-year project after her father was diagnosed with Parkinson's disease.

The Reset line — styled [R E S E T] — has some features in common with other adaptive clothing, which allows people with restricted mobility to dress themselves by excluding finicky elements like buttons and zippers.

But it goes a step further by incorporating a graphic print that might improve mobility through visual cues.

Dugar based the print design on research that suggests a link between gait disorders and visual perception, in particular a the Journal of Neurology paper that looked at the effects of parallel pedestrian-crossing-style lines on a walking surface.

In this study, the pattern has to be dynamic — either the surface or the observer has to be moving — to achieve the desired brain "reset". However, Dugar sought to replicate the effect of movement through optical illusion.

Its application on clothing should be useful for people with Parkinson's disease, because the involuntary trembling and diminished hand strength can make the act of getting dressed difficult.

Another feature of the Reset collection are the colours and cuts, which Dugar describes as "classic yet contemporary" and which are meant to appeal to a younger market. 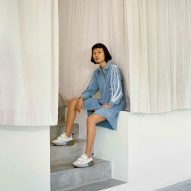 Bodice clothes are for the women "challenging conventions" in Indian society

As the designer points out, while most Parkinson's sufferers are over the age of 60, in its early onset form the disease can strike people as young as 29, and their needs are often overlooked.

"Reset aims to serve as an inspiration and generates a new approach to transforming adaptive clothing for ageing and mobility challenged people," said Dugar.

"The paradigm is currently shifting and fashion, which bore a stigma of disfigurement, is becoming more inclusive. With the consumption increase and marketing industry focusing on dispelling the stereotype for ageing, the current scenario for adaptive clothing is at the storming and norming stage."

Other, more common adaptive features in the Reset clothing line include magnetic flies instead of trouser zippers and velcro fastenings.

Among other recent adaptive designs for people with mobility issues is IKEA's 3D-printed ThisAbles collection of furniture hacks. Another is Microsoft's customisable Xbox controller, which comes packaged in a box redesigned to be easier to open.