A team of scientists at Tufts University in the US have created xenobots, tiny robots made from frog skin and heart cells that can walk, work together and heal themselves.

Algorithms define the configurations of frog cells, which are then constructed by humans to create a living robot that the scientists have called a xenobot, after the Xenopus laevis species of frog they are made from.

These aquatic organisms live for up to seven days, and the team hopes that in future they can be used to deliver drugs into people's bloodstreams, clean up microplastics from the ocean, or manage radioactive waste spills.

A number of variations of the 0.7 millimetre-long robots are designed using a computer algorithm.

"Computers model the dynamics of the biological building blocks (skin and heart muscle) and use them like LEGO bricks to build different organism anatomies," said the team of scientists.

"An evolutionary algorithm starts with a population of randomly-assembled designs, then iteratively deletes the worst ones and replaces them by randomly-mutated copies of the better ones," they added.

"It is the survival of the fittest, inside the computer."

The manufactured organisms are currently able to walk and push things, and work collaboratively with other xenobots in a swarm.

Their advantage over metal micro-robots is that they can heal themselves if they sustain damage.

Also, because they are formed of organic material, they would be less potentially damaging inside a human body or any natural environment they were introduced to. Once they have served their intended function they can biodegrade naturally. 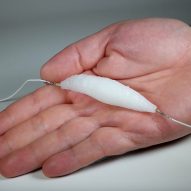 "Most technologies are made from steel, concrete, chemicals and plastics, which degrade over time and can produce harmful ecological and health side effects," said the scientists.

"[It's] useful to build technologies using self-renewing and biocompatible materials, of which the ideal candidates are living systems themselves."

Xenobots live in freshwater and can stand temperatures between four and 26 degrees celsius.

They can survive for a week on the lipids and protein in the frog cells before they stop functioning – something the scientists said is "a positive feature in terms of safety for synthetic biology constructs".

They can't reproduce, but they can be kept alive for longer if they're grown in a nutrient-rich cell culture.

The team that created the xenobots said the project opens up many exciting avenues at the intersection of robotics, biology and medicine.

"If we could make 3D biological form on demand, we could repair birth defects, reprogram tumours into normal tissue, regenerate after traumatic injury or degenerative disease, and defeat ageing," they said.

"Once we figure out how cells can be motivated to build specific structures, this will not only have a massive impact on regenerative medicine, but the same principles will lead to better robotics, communication systems, and maybe new (non-neurocentric) AI platforms."

The scientists have made the code for people to design their own virtual organisms available on open-source software.

Other recent robotic developments that combine technology and biology include 3D-printed synthetic muscles and a robot-plant hybrid.