Ceramicist Gregg Moore has created crockery for the Blue Hill at Stone Barns restaurant outside New York, that is made from the bones of the very cows whose dairy and meat is served.

The table setting encompasses a bowl, plate and cup, with paper-thin white walls that are left unglazed to allow the eerie translucency of the material to shine through.

Their distinctive, luminescent quality is achieved using an 18th-century recipe for bone china – a type of porcelain made using animal bones.

In line with the restaurant's nose-to-tail philosophy, which seeks to utilise all parts of an animal, Moore has created his version of the material with bones that went unused in the kitchen.

These are cleaned and then fired, in a process called calcination, to turn them from a living material into calcium phosphate.

"What remains goes into a rotating mill called a ball mill, where it is mixed with water and ground into a sludge," Moore explained to Dezeen.

"I then dry and pulverise this to create bone ash and create a mixture that's 50 per cent bone ash, 25 per cent English china stone and 25 per cent kaolin."

In pursuit of the purest possible result, Moore sources both the stone – a type of partly decomposed granite – and the white kaolin clay from Cornwall in England, as their American counterparts can often be "dirtier".

The mixture finally gets mixed into a liquid slip and cast into a mould, where it remains for only three to five seconds.

"For the other objects I create, I cast the porcelain for about 20 minutes," he continued. "But in this case, I'm trying to get as thin a result as possible, and the less time the liquids spends in the mould the thinner the wall is."

Finally, after a day of drying, the dishes are fired. Although they go into this process perfectly round and symmetrical, the rims of the taller pieces bend to the intense heat in the kiln, creating gently curved, organic forms.

Much of the restaurant's beef and dairy comes from the Blue Hill farm in Massachusetts – which gives the restaurant its name – where the cows are grass-fed and free-range.

This, Moore explained, manifests itself not just in their milk or their meat but also in their bones.

"In the whole field of ceramics, bone china is the only material that was once alive, everything else is geological or mineralogical," he said.

"And so it has the ability, if we look at it closely enough, to tell us something about our interaction with those animals and the environment they lived in."

In an as-yet unpublished study Moore has been undertaking with evolutionary biologist Dr. Tobias Landberg, the duo found that the chemical composition of a cow's bones is fundamentally different when it is allowed to graze on grass or fed grains in a contained environment.

"If a cow is being raised on grass, it's also going to move more to seek out that grass, so it's a combination of both diet and exercise that transform the physical bones of the animal," Moore explained.

"There are impurities present in grain-fed bone ash, leading to a different colour spectrum, a lower firing temperature and melting point."

When it comes to turning it into porcelain, that means it can survive a hotter, more intense firing process, which in turn results in stronger, more translucent porcelain.

The result is a new take on an antiquated material, often associated with commemorative coronation tea sets and ostentatious displays of status. 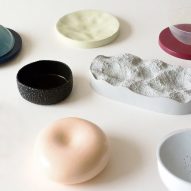 "I think there's an opportunity with a material like that, which has such a narrowly defined history, to be able to express new ideas," said Moore.

"I think people's mindset is certainly shifting at the moment when it comes to what goes into our food and I'm hoping that with this work, that same question would be asked about what goes into the plates that serve the food."

Reexamining the ways in which we farm animals and the waste byproducts we create in the process has been at the heart of Moore's ongoing, five-year collaboration with Dan Barber, head chef and co-owner of the Michelin-starred restaurant.

As part of the project, the ceramicist has previously created a series of textured plates, with surface indents formed by grazing and pecking animals from the farm.

Designers are coming at the issue of sustainable food consumption from different angles, with some, like Moore, focusing on rethinking the tableware we use.

Vienna-based Teresa Berger, for example, has created a collection of multi-sensory crockery in the hopes of helping us eat more consciously.

Others still have focused on the production process itself, with graduate Rob Russell developing an at-home bioreactor that allows users to reduce their carbon emissions by growing their own edible algae.