Architecture firm OMA has designed a luxury resort called Potato Head Studios in Bali around a plaza that is open to the public.

The Potato Head Studios resort is the latest addition to the Desa Potato Head village, which comprises a beach club and two hotels in Balinese beach town Seminyak. It is OMA's first hotel on the Indonesian island.

The firm developed the project to usurp the private typology of resorts in tropical locations.

Alongside guest amenities, it has a number of areas that are accessible to the public including an exhibition space, bar and a plaza for hosting cultural events.

"The Potato Head Studios is a resort for open engagement rather than private consumption," said OMA.

"It is a new space for the community where visitors of all kinds – hotel guests and the general public – experience contemporary Balinese culture, while making it."

To achieve this, OMA has located the majority of facilities in a structure that is elevated above the ground and arranged in a square shape. This allows for an open, public plaza at ground level that leads to the beach at the rear.

The entrance to the plaza, meanwhile, is covered by another elevated block that holds the public route inside and features a private roof garden on top.

Restaurants, pools, spas, an exhibition space and a bar are all located in the main structure, alongside the suite of identical guestrooms. On top, there is a large public rooftop with views to the sea that is accessed by a zigzagging concrete stair.

The project, which was led by OMA partner David Gianotten, aims to reference the typical materials used in Balinese culture.

Greenery features prominently in the plaza to offset the concrete structure. Where possible, the team also aimed to used locally sourced and recycled materials.

Slatted woodwork envelopes the large, central volume, while underneath it features a woven ceiling formed of recycled plastic bottles made by locals.

"We worked with a large number of local people to handcraft the textures of some concrete walls and also create the woven recycled plastic ceiling panels," Gianotten told Dezeen. 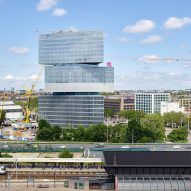 OMA reveals tower made from trio of stacked triangles

"Textures of the walls and the uniqueness of each ceiling panel give the building tactility, and also represent a construction process that respected the Balinese arts and crafts tradition and the environment."

Other details include handcrafted breezeblock walls with geometric patterns, terrazzo made from waste concrete and a traditional thatched roof material called ijuk. The concrete is also marked with reclaimed wooden boards.

In the guest rooms, the textured concrete informs the hues of the other features.

Among these are a series of built-in wooden furniture, which form wardrobes, cabinets and bathtubs, and pinkish terrazzo flooring.

Translucent, white curtains are used to cover large glazed doors that lead onto private balconies from each room.

The Potato Head Studios joins a number of resorts in Bali, which is a popular holiday destination such as the Katamama hotel.

OMA was co-founded in 1975 by Dutch architect Rem Koolhaas, and has offices in Rotterdam, New York, Hong Kong, Beijing, Doha, Dubai and Perth. The international firm has a number of projects currently underway, like a residential tower in Kuwait city and waterfront conference centre in Shenzhen.