A perforated metal screen shades the plywood interiors of a performing arts centre for a college in Victoria, Australia, by Branch Studio Architects.

The perforated screen that shades the west and south elevations from the sun is based on an unfurled piano roll.

When the perforations are translated into notes they play the music for Nacio Herb Brown's 'Singing in the Rain'.

The Arts Epicentre replaces a demolished 1960s convent building that had been subject to unsuccessful adaptations over the years.

Above the central performance space, four plywood skylights based on a dome structure from the old convent.

The ground floor is clad in brickwork to the south, in reference to an adjacent house, and facing the school to the west are a run of concrete columns.

The upper floor extends slightly towards the southwest, shading the colonnade below and providing the first floor views views out over the campus.

Black wool curtains that can be used to completely isolate the performance areas from the outside, creating a play between light and dark.

Facing the church that accompanied this convent, the Arts Epicentre opens up to a large courtyard and amphitheatre with a dramatic 15 metre-wide folding door of glass and steel.

A series of open foyers and studio spaces look out over the landscape.

In the corner of this space, a matte black spiral staircase underneath a fifth skylight leads up to the first floor, where a more enclosed series of spaces house music studios and multi-purpose classrooms.

A staircase encased in metal mesh leads directly from the entrance to this upper level.

"We felt the building had the potential to be a real landmark for the campus, the college as a whole, and even the surrounding community as the building could become a wider public interface," said Branch Studio Architects.

"We treated the design of the building as more of a public building similar to that of a public performing arts building rather than just a distinct college campus school building."

The floor plans were organised based on a visit by the practice to the Victorian College of the Arts School of Drama in Melbourne, designed by Edmond and Corrigan to subtly blend performance and public spaces.

This was replicated on the ground floor by arranging practice spaces around the perimeter of a double-height performance space, able to be isolated or merged together from both each other and the outside.

"The internal arrangement of spaces is curated around the idea of audience and performance mirroring one another," described the practice. 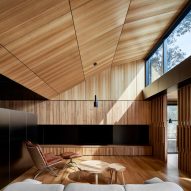 Melbourne-based Branch Studio Architects recently used similar themes of light and dark in for a home on Phillip Island, which features rooms that are lit in response to the intimacy of the interior spaces.