Design studio Barber Osgerby has created the packaging for Jukes Cordialities, a non-alcoholic drink invented by their friend, the wine writer Matthew Jukes.

Described as "top-flight, adult cordials assembled by the olfactory and sensory mastery of an expert wine taster," Jukes Cordialities is meant to offer an enjoyable and sophisticated alternative to alcohol for people on a night out.

The packaging design is elaborate but recyclable, with a cube-shaped box opening up to reveal nine miniature bottles.

Each bottle contains two or three servings of cordial that the drinker adds to water at an intensity to suit their own taste.

The design is meant to encourage the ritual of self-pouring and appear attractive in a sophisticated bar environment.

There is a monochrome colour scheme, with a numeral representing the formula of choice as the primary focus. Jukes 1 has a citrus-and-herb flavour, while Jukes 2 is "fruitier, deeper and spicier".

Barber Osgerby's creative directors Edward Barber and Jay Osgerby have a longstanding friendship with Jukes, who provided their first commission. He hired the pair to design the interiors of his London wine bar The Crescent in the 1990s, when the pair were recent graduates of the Royal College of Art. 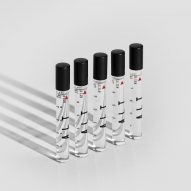 "Meeting Matthew was undoubtedly an encounter that not only led to an enduring friendship but that also set our path into design in motion," explained Barber Osgerby.

"We are eternally grateful for his collaborative, explorative and innovative approach to commission work. This set the tone for our studios working process from then on. We regard Matthew as the authority on wine and an ardent design supporter."

Jukes expressed his appreciation for the duo's Loop table in particular — a piece that was originally designed for his basement bar but ultimately not produced for or installed there.

"I have one of the very first Loop Tables in my sitting room and it has seen four children bash it, sit on it and regularly stand on it, and while it is a little scratched it still looks stunning," he said.

"I admire it every day for its simplicity, elegance, functionality and beauty. It is a work of art. It feels amazing, too."

Barber Osgerby founded their studio in 1996 and are based in London. They are best known for industrial design projects such as their Tip Ton chair for Vitra and the design of the London 2012 Olympic Torch.

Among their other recent projects is the Brea outdoor lounge system for Dedon and the Smalto enamel table for Knoll.