Kvadrat launched the Maya and Jaali fabrics at the recent Stockholm Furniture & Light Fair, where Nipa Doshi and Jonathan Levien were also this year's Guest of Honour.

The designers created a pavilion containing some of their best-known works in the fair's entrance hall and used the new fabrics in the space as curtains and upholstery.

The Maya design is a light and airy curtain textile with a see-through structure and a matte finish. The weave results in an open grid, balanced with narrow, densely woven bands that create the illusion of a striped pattern running from flooring to ceiling.

"Maya has an interesting construction because it's very loosely woven but also very robust," explained Doshi during Dezeen's visit to the Guest of Honour installation.

"I looked at a lot of Indian saris which have both transparency and structure," she added. "This also helped inspire the colours, which are light and summery."

Maya, meaning illusion in Hindi, is designed to create a play of light and shadow as it moves or as the sun's position changes throughout the day.

"The idea was to create something that is as light as air, also a bit opaque like smoke, and cool like the moonlight," Doshi added. "You can see through it, and it moves gently if there's a breeze coming through." 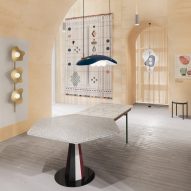 "It's a very architectural fabric and it's about creating a pattern that has texture built in," said Levien. "It's almost as if you've taken a hard material like concrete and machined it so you feel the depth of the light and shadow."

Named after a Hindi word meaning net or grid, the fabric's surface features a slightly raised hexagonal pattern. The subtle contrast between the lighter yarns used for the pattern and the flat background gives the textile both lightness and depth.

The textile is produced in 20 colourways selected from around 1,500 woven samples that Kvadrat produced based on colours the designers developed by mixing paints in their studio.

The colours chosen for the Jaali fabric complement the hues of two other textiles that Doshi Levien previously created for Kvadrat. The designers added that they enjoy applying their own architectural lens to the design of surfaces for interior use.

"Fabric is one of the few materials that's used on many different scales; you wear it, you sit on it and you create space with it," Doshi pointed out. "When you look at a building and you look at the blinds or curtains, they form such a big part of the environment."

"A curtain has the same impact as a constructed wall," Levien added. "It's a large surface area of colour. That's how we perceive fabric, as an architectural element, not just a furnishing material."

Alongside the textiles, Doshi Levien also developed a playful animation depicting them as characters in a musical cabaret.

Characters like a ballerina and a "whirling dervish" help to express the contrast between the opaque upholstery fabric and the free-flowing, transparent curtain.

Also at this year's Stockholm Furniture & Light Fair the Bouroullec brothers revealed a chair made using one continuous piece of rope and Studio David Thulstrup unveiled a pair of "co-dependent" side tables for Møbel.