Called Pylonesque, the classroom was created as an additional space at the Ban Wang Toey School in the Thai province of Uthai Thani. It is covered by a  roof made of two funnels that collect water and channel it to storage containers underground.

Hadin Charbel, co-founder of Pareid, said he wanted the building to be both a classroom and a visible water collection structure to demonstrate the importance of water to the school's students.

"The project is located in a very rural part of Thailand, where running water in some instances is not as easily accessible as one might assume," he told Dezeen.

"It seemed fitting that a multi-use space at a local school could integrate architecture and local strategies as more than just a practical response, but one that would stimulate the students, while also making water collection accessible, transparent and a conscientious act."

To reinforce this, exercise machines have been placed around the classroom to power pumps that move the water between the underground storage areas.

Pareid designed the classroom in collaboration with students from Chulalongkorn University to be a flexible space that was appropriate to the Thai climate and did not rely on artificial cooling or lighting.

"Thai context is a bit tricky, as it deals with two types of extreme environmental conditions – heavy rains and year-round heat," Pareid  co-founder Deborah López told Dezeen. "Most typical constructions in the area respond to this by being entirely sealed off with some windows, which in turn results in the need for fans and artificial lighting."

"Pylonesque was designed with the intention of utilising the natural environment while limiting some of the undesirable impacts – a combination of high ceilings, open plan, wall-less perimeter, and specific finishings such as translucent vinyl for light and water boiled plywood for thermal insulation, allowed us to do this," she continued.

The project's main structure is made from a simple steel frame that takes its form from electricity pylons and gives the building its name.

"By studying the construction method and geometry used for electric pylons, we decided to generate a structure that could double as a scaffolding and be mounted by hand. Thus, the maximum length of each linear member is four meters, which allows one or two people to manually move the metal bars and place and weld them in situ, where it can progressively be climbed as it's mounted," said López.

"Geometrically, the structure as a whole is made of a repetition of inverted umbrella-like modules that can be built with a limited  number of unique cuts and measurements but still allow for a geometric complexity."

The red steel frame is topped with purple corrugated zinc panels and red canopies to give the building a distinct identity and contrast with the other school buildings. 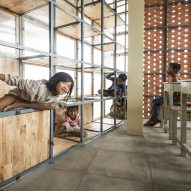 "The school's existing buildings are primarily a combination of dark and light greens, which blend in with the vegetation and resonates with part of the school's name, Toei, which translates to 'green banana leaf'," added Charbel.

"However, the purpose of this new building and space is to become a new gathering point and a kind of beacon on the school grounds, so we opted for a strategy of standing out while fitting in."

The covered space is completely open, with no fixed items except the two water-collecting funnels. Pareid designed a range of modular furniture to be used in the classroom.

"Traditional classrooms and spaces operate on the basis of a hierarchical order," Charbel continued. "Instead of mandating how the space ought to be used, we implemented custom modular furniture that would allow for students and staff to rearrange as needed."

The classroom was created as part of the Design Build for Community collaboration between the International Program in Design and Architecture at Chulalongkorn University in Bangkok and lift company Mitsubishi Elevator Thailand.

Other recently completed schools include a classroom in India that can be dismantled to evade bulldozers and a Cambodian school that has a gridded facade that doubles as a jungle gym.

Photography is by Beer Singnoi.