Product designer Alexander Lervik, broadcaster Li Pamp and designer Petter Thorne speak to Dezeen's Marcus Fairs about the line between art and design in this talk filmed for Aritco in Stockholm.

The speakers were gathered by lift manufacturer Aritco to discuss what distinguishes the disciplines of art and design, and to debate the importance of differentiating between the two.

The talk took place in an exhibition of Lervik's artworks titled Imaginations at Sven Harrys art museum in Stockholm. Lervik is a Swedish product designer and artist, whose work is often concerned with questioning the line between art and design.

His projects include a watch with a perforated metal face, and a chair made of wooden rods like a bed of nails.

Appearing alongside Lervik on the panel was Pamp, a Swedish television presenter and design expert known for hosting shows about antiques. Pamp's career began as an art historian and curator of design artefacts at Swedish action houses Bukowskis and Stockholms Auktionsverk.

Also on the panel was Swedish product designer Thörne, co-founder of Swedish design collective Skaparkollektivet Forma. The collective won a Dezeen Award in 2019 for its installation 17,000, which consisted of a wooden superstructure that bears 17,000 individual artworks that represent minors at risk of deportation from Sweden. 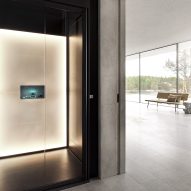 Watch our talk on the power of design with Aritco

Topics discussed by the panel included how an item's price can distinguish whether it can be considered art or a design piece, whether design can have emotional functions as well as practical ones, and how a new generation of creatives are increasingly doing away with the distinctions that have traditionally separated art and design.

The talk was held at the Sven Harrys art museum during Stockholm Design Week, which took place in the Swedish capital from 4 to 8 February.

Aritco is a Swedish lift manufacturer. The brand has worked with Lervik to create the Aritco HomeLift, a design-led domestic lift that can be controlled with a smartphone.

Dezeen previously hosted a talk with Aritco during the Downtown Design fair in Dubai, in which a panel comprised of Fernando Mastrangelo, Lina Ghotmeh, Ashiesh Shah and Sanna Åkerlund Gebeyehu spoke to Fairs about the power of design.