Graphic designer Brian Roettinger has created psychedelic visuals for Kesha's album High Road, featuring an album cover depicting a candle made from a 3D scan of the pop star.

Roettinger, who has worked with artists including Jay Z, Childish Gambino and Florence and the Machine, is in an ongoing collaboration with Kesha as art director of her High Road album and tour.

The album art is a photograph taken of a life-like Kesha candle with drips of melting wax.

"We 3D scanned her and then from there, we created a mould and made candles of her head," Roettinger told Dezeen. "That became the iconography for the album. It's a picture of her but it's not really a photo of her. It's like a version of her."

The melting effect, Roettinger explained, is meant to represent how "nothing is permanent".

"When you think of a bust in a museum or gallery, it feels like it's a thing that represents permanence, like this an everlasting objects," he said. "By making this object into a candle it contrasts that."

For her fourth album, Kesha examined themes of resurrection, rediscovery and joy, in response to her struggle in the music industry.

In 2014 the singer, formerly known as Ke$ha, sued her producer Dr Luke, accusing him of rape and attempting to be released from her contract with him. Dr Luke has countersued, accusing her of defamation.

"I feel like I had to address some very serious things, and now this time around I have reclaimed my love of life," Kesha said in a statement to Rolling Stone about her new album.

"To quote one of my favourite songs of all time I've decided to 'fight for my right to party!'"

High Road's album art, with it's melting wax version of Kesha's face, is a "subtle" nod to this process of metamorphosis said Roettinger.

"How can she shed some of her last record but also take some of her past? Like, how can you like go through this sort of changing effect as an artist," he explained.

Kesha posted a video of candle burning in reverse, so that it transforms from a melted stub to her full face, to announce her album launch.

Roettinger said that the candles will also be available as merchandise for fans to buy.

"People can burn their own candles and photograph it, and there's your version of the album cover," he said.

Kesha and Roettinger used this metaphor of melting wax for a set used for her live performance at the American Music Awards.

Roettinger created a set of stained glass church windows that appear to be warping and melting, with the glass creating a puddle of acid-bright colours.

"What I like about creating this album is that everything is approached as a metaphor. So they're these distortions of reality," he said of the "psychedelic, but abstract" design.

"It's almost like this church is melting or crying, either one, it depends on how it's lit." 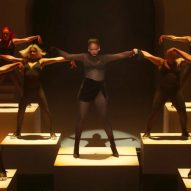 Rihanna's lingerie show set design is an architectural "mash up"

The juxtaposition of something melting away but in bright and happy colours underscores the album's theme of defiant optimism.

A frame of milled wood forms the base of the set, which was sprayed with foam and then sanded into shape before being painted and coated with resin.

Next Roettinger is collaborating with Kesha on the sets for her upcoming world tour.

"All I know is it's going to be much different than anything she's done," he said. "So that's exciting."