Architecture studio MYT+GLVDK has created an upscale food court inside a Mexico City shopping mall with elements that take cues from Japanese and Mexican design traditions.

Among the variety of dining options is a German-style Biergarten with an outdoor patio, a cocktail bar with art deco accents, and a few choices for Mexican food. Local firm MYT+GLVDK describes it as Mexico's first "multi-cuisine restaurant".

The complex also includes office space and a generous public park in the centre of the development.

A large central opening reveals a helical staircase and ramp that circle around one another, leading up to mezzanine overlooking the space.

Two restaurants, called La Imperial and Moshi-Moshi, have a more defined seating area, and are distinct from the other vendors.

La Imperial, a Mexican restaurant, was designed to "evoke the golden age of cantinas and adds baroque and late 19th-century Mexican touches", according to the studio. A patterned tile floor, an antique bar, and whitewashed brick walls are among the traditional element. 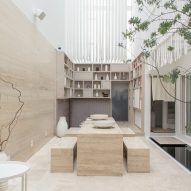 Moshi-Moshi, a Japanese eatery, has a lighter and more contemporary palette. Pale wooden booths with denim accents recall Japanese design, and the space is lit by hanging fixtures that are meant to reinterpret traditional paper lanterns.

The restaurant is laid out in four rows of booths, between which run conveyor belts carrying individual plates of sushi for diners to choose from.

"Moshi Moshi brings together the Cocina Abierta interior design with a new range of materials — including blue terrazzo, denim and wood — along with the comprehensive redesign of this renowned conveyor belt sushi restaurant," said MYT+GLVDK.

The Mexico City studio is a newly formed firm that resulted from the merger of two offices, led respectively by husband and wife Andrés Mier y Terán and Regina Galvanduque.

Galvanduque also completed the Ryo Kan hotel in the city's Cuauhtémoc neighbourhood, which is designed to merge Mexican materials and Japanese traditions.

Other restaurant projects in Mexico City include a "cave-like" space by Michan Architecture that is illuminated by oversized, prismatic skylights, and a small Italian restaurant by Taller ADG that is located within a board-formed concrete vault.

Photography is by Isa Arjona.