Leaf House is located in a quiet residential neighbourhood in Tokyo where its owners also run a dentistry clinic.

Its name refers to the visual similarity of the roof rafters to the veins of a leaf.

Conceived by Apollo Architects & Associates as an "intermediate area between the indoors and the outside world", the home is arranged so that all of its rooms face inwards to the central garden, planted with a single tree.

The exterior of the home is almost entirely blank, save for two glass areas – one semi-mirrored and one frosted.

These windows give glimpses of the tree inside, and a series of small, high-level windows at the rear of the building.

"It is impossible to imagine the interior living space based on the dark grey galvalume steel outer wall or the closed facade made of half-mirrored glass," said the studio.

"Moving inside one becomes conscious of the comfortable contrast afforded by the expansive space, suffused with natural light."

Leaf House's entrance, cut-out of the facade to create an area covered by the upper storey, leads into an L-shaped corridor.

This corridor runs alongside the children's bedrooms to reach a large master bedroom at the rear of the home.

Glazing with sliding doors surrounds the courtyard at this level, providing light and access to fresh air for all of the bedrooms.

The first floor is entirely taken up by a large living, kitchen and dining area that wraps around the courtyard.

This level is illuminated by a skylight that covers half of the roof, allowing light to enter through the gaps between the wooden rafters. 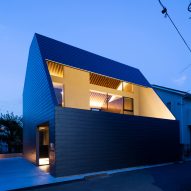 "Looking up at the ceiling, the exposed rafters - the most prominent feature of this house – transition from the interior to the exterior, where they transform into a pergola," said the studio.

"The sky is trimmed by a striped pattern evoking the veins of a leaf that crosses the inside and outside of the house along the simple gabled roofline," continued the studio.

"The space is imbued with a sense of depth by the play of light and shadow projected into the room."

Tokyo-based Apollo Architects & Associates was founded by Satoshi Kurosaki in 2000, and has previously completed another house in Tokyo that featured a closed, black exterior, opening-up internally to overlook a courtyard planted with a tree.

This approach of a closed exterior and a courtyard interior was also used by Osaka-based practice Arbol, which designed a wood-clad home in Akashi looking inwards to courtyards for growing food and drying clothes.