Camira's Oceanic range has a twill weave comprising a light warp and a deeply saturated weft.

Up to 50 per cent of the fibres are created from recycled plastic bottles that were sourced from the Mediterranean sea and beaches as part of the SEAQUAL Initiative – an organisation that works to combat marine plastic pollution by collecting and processing bottles.

"For every two kilograms (four metres) of oceanic fabric sold, one kilogram of waste is removed from the ocean," said Camira. "One metre of fabric equates to 26 plastic bottles."

The waste is washed, shredded into a mixture and then extruded into chips. The fibres are treated into yarn and texturised, before being sent to Camira's factory in Huddersfield, England.

Camira was founded in 1974 and is based in Mirfield, West Yorkshire. It has six factories, five of which are in the UK and one in Lithuania. 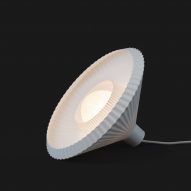 Plumen and Batch.works launch 3D-printed lampshades made from recycled plastic

Oceanic is the latest in a series of recycled textiles that Camira has produced in the past 20 years, beginning with a wool fabric made from old jumpers called ReSKU.

As part of its bid to become more sustainable, the brand has aimed to create a more circular production method with its yarn supplier. In this process, remnants from its factories are taken back to the supplier and recycled into new yarn. Up to 25 per cent is incorporated into a new fabric.

Oceanic forms part of a greater collection of designs made with recycled plastic, including 3D-printed lampshades, marbled tiles, and a terrazzo-like material by Plasticiet.