Benjamin Hubert's design agency Layer has collaborated with American startup Cat Person on a collection of modular furniture for cats that can change as the animal grows.

After discovering that 35 per cent of pets in the US are owned by millennials living in cities, the New York startup teamed up with Hubert's studio Layer to create a selection of feline accessories that would reflect the tastes of this demographic.

Both the Mesa Bowl and the Canopy Bed have a minimal, contemporary aesthetic and a changeable design, including mix and match colours.

Inviting materials and geometric forms are designed to be "proudly displayed in the home and on social media".

"We saw an opportunity to disrupt a market underserved by good design with a collection of products to connect with a new generation of cat owners," said Hubert.

"The collection is based on extensive research into cat and cat owner behaviours to find new insights that have driven innovative features," he added.

"The resulting collection not only meets the specific needs of domestic cats, but also seamlessly integrates into the home life of owners and offers an opportunity for them to celebrate their feline friends."

The Mesa Bowl is a modular feeding station. It's comprised of a round bowl made from durable non-BPA plastic and a sculptural stand, which sit on a semi-rigid plastic placemat to make the area easy to clean.

Layer fabricated the shallow bowl with whiskers in mind. The design lets cats eat without getting "whisker fatigue", which occurs when their whiskers continually brush up against the sides of their food or drink containers.

The accompanying stand enables the feeding station to grow along with the pet. The bowl can be used directly on the tray by kittens or on the stand for adult cats, to avoid them having to crouch or hunch when feeding.

According to Layer, the Mesa Bowl and stand take design cues from high-end homeware, in a bid to seamlessly blend into the owner's interior space.

"Most cats will sleep up to 17 hours each day, with kittens and older cats napping for even longer. As such, it was important to provide a sleeping area that could adapt throughout the day," Hubert said. 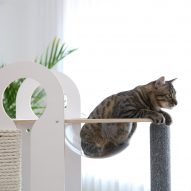 Based on these findings, Layer designed a bed with a detachable, cone-shaped element that can be added when the cat wants a more enclosed space.

This can be folded down to half its height to get rid of the over-head cover, and taken off altogether to create an open bed.

The bed includes a circular memory foam cushion that mimics cats' curled sleeping position, while the detachable element is made from a felted PET material that can withstand the pets' scratching habits.

Both the Mesa Bowl and the Canopy Bed are available in three different colourways named Jungle, Tundra, and Savanna.

Hubert established an eponymous design studio in London in 2011, which he renamed Layer four years later. The studio has worked on projects with brands such as Bang & Olufsen, Airbus, Panasonic and Moroso, and start-up Nolii.

Founded in March 2020 by Jimmy Wu and Lambert Wang, Cat Person is the company behind the subscription shaving company Harry's.

The male grooming brand previously designed a range of playful packaging based on a comic strip character that featured on confectionary wrappings in the 1950s.