Slovenian graphic designer Jure Tovrljan has redrawn the logos of brand including the Olympics, Starbucks and Nike to show how the coronavirus has impacted our everyday lives.

In the 12-part series Tovrljan has redesigned well-known brands' logos to reflect how the pandemic has affected people and businesses around the world.

"I believe that iconic logos are a visual message we're all familiar with," Tovrljan told Dezeen.

"And as soon as someone disrupts them in any way, we feel uncomfortable. So they can become a very strong attention grabber. These days, people can tend to pay more attention to big brands than world leaders."

While healthcare systems including in the UK and the US are experiencing a shortage of face masks due to panic buying, Tovrljan pictures the Starbucks siren proudly donning hers.

The dribbling silhouette of player Jerry West in the NBA logo is replaced with a reclining figure on his laptop, as the league's current season is suspended indefinitely. This is a nod towards the fact that many people are now confined to their homes.

The overlapping circles of the Mastercard logo, as well as the iconic rings of the Olympic flag are reimagined safely spaced apart. 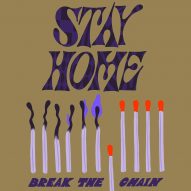 "I tried to send a message for people to stay at home and if they really need to go out, act responsibly, keep your social distance," the designer explained.

This comes as it was announced on Tuesday that the 2020 Olympics would be postponed until next year.

Elsewhere, Tovrljan opted to introduce tongue-in-cheek wordplay, rather than making changes to the actual design.

LinkedIn becomes LockedIn while Nike's often-co-opted Just Do It slogan is turned into Just Don't Do It.

The sports brand has started closing stores in North America, western Europe as well as in the Australias, and shared a post on social media calling for people to "Play inside, play for the world".

Other brands including McDonalds in Brazil and Coca-Cola in the US have started independently sharing ad campaigns in which the core elements of their logos, such as the golden arches, are noticeably spaced apart to promote social distancing.

Meanwhile, a slew of independent graphic designers have taken it upon themselves to create playful public service announcements to circulate advice and educate people about the benefits of staying home.