A huge faux staircase interrupts the floor plan of this house in Tokyo, which design studio Nendo has created for three generations of the same family.

Stairway House is situated in a quiet residential pocket of Shinjuku, a ward of Tokyo known for its neon-lit buildings, bustling streets and vibrant nightlife scene.

The three-storey home is designed to accommodate three generations of the same family. It replaces a smaller, timber-framed property that had become overshadowed by surrounding apartment buildings.

Nendo constructed the new house in a brighter spot at the northern end of the site, being careful to preserve a mature persimmon-fruit tree that was planted by previous occupants.

The more accessible ground floor has been designated to the older couple in the family and their eight pet cats, while the upper two floors of the house have been given to the younger couple and their child.

To prevent the two parties from feeling isolated in their respective living quarters, the studio decided to erect a sweeping staircase-like structure that unites every level of the home.

It runs from the back garden, through the glazed rear facade and right up to the top floor.

Steel has been used to craft the portion of the structure that's inside Stairway House, while concrete was used to make the outdoor steps.

"Not only does the stairway connect the interior to the yard, or bond one household to another, this structure aims to expand further out to join the environs and the city," Nendo explained.

A small playroom for the cats and bathroom facilities are hidden within the structure, as well as an actual staircase that can be used to access the home's higher floors.

The external steps – including those in the gravelled garden – have been dotted with an array of leafy potted plants. Nendo included this feature to evoke the feel of a greenhouse.

The steps also serve as a comfy, sun-soaked lounge spot for the cats throughout the day. 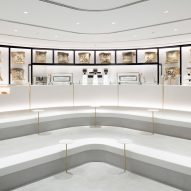 Some of the glazed panels in the gridded facade can also be pushed back to fill the interior with fresh air.

A restrained approach has been taken to decorating the rest of Stairway House.

The majority of the furnishings, such as the breakfast island in the kitchen and study desk, are jet black.

Tall storage shelves are integrated into the white walls, so that inhabitants can neatly stow away their belongings.

Even the front facade of the home has been kept simple: it's completely windowless.

Nendo is a multidisciplinary design studio with offices in Tokyo and Milan. Recent work includes a kinetic installation made up of blossom-like raindrops and a clock that morphs into the shape of a perfect cube twice a day.

Stairway House is not the only project to make faux stairs a focal point – last year, Beta Ø Architects inserted a dramatic stepped sculpture into the central void of a home in Madrid.