To mark Earth Day, VDF collaborated with The World Around to host a series of talks, interviews, short films and essays exploring ideas that could "shape the future of our relationship with the planet".

The programme also included an interview with research office Design Earth by writer Carson Chan, which you can read here, and a series of illustrations by data journalist and artist Mona Chalabi, which you can see here.

The symposium concluded with the premiere of a new short film by Andrés Jaque and Ivan Munuera, which you can watch here.

We also conducted a live video interview with curator Beatrice Galilee about the programme, which is available here.

Curated by Beatrice Galilee of The World Around in partnership with Facebook's Artist in Residence programme, the Earth Day 2020 symposium featured over twenty leading figures working on environmental issues around the world.

It took place on the 50th anniversary of the first Earth Day on 22 April 1970, which saw 20 million people in the USA demonstrate against the damage human activity causes the natural environment.

The online programme replaces a physical conference that Galilee was planning, which had to be cancelled due to the coronavirus pandemic.

"The convening will give a platform to the work and ideas that could shape the future of our relationship with the planet," said Galilee.

"[It will explore] ways to ethically reconnect with our food, designing, building and living with human and non-human animals, radical new forms of pedagogy, biodegradable accessories and an insight into the extreme new visual landscapes the coronavirus has generated."

"The event will include interviews, short films, essays, manifestos and reflections that together create a diverse and complex voice of a generation of pluralistic practitioners designing, thinking and making with the earth and its multiverse of inhabitants in mind," she added.

The Earth Day 2020 symposium is the second event organised by The World Around, a platform for architecture and design discussions founded last year by Galilee, Diego Marroquin and Alexandra Hodkowski.

Dezeen live streamed the first The World Around event in New York in January this year.

Starting with a live conversation between Galilee and Dezeen's editor-in-chief Marcus Fairs, the Earth Day 2020 symposium was structured around three themes – Rethink, Reimagine and Recreate.

Each part of the event was broadcast in a separate post on a dedicated page as part of Virtual Design Festival.

The first part of the symposium included a talk by Nigerian architect Kunlé Adeyemi, alongside a series of discussions. 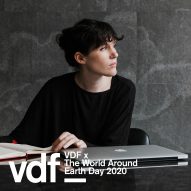 Live video interview with The World Around curator Beatrice Galilee

These talks were followed by an interview with collaborative architecture practice Design Earth conducted by curator and writer Carson Chan, and the unveiling of a series of new Earth Day illustrations by data journalist and artist Mona Chalabi.

The symposium concluded with an exclusive screening of a new short film called The Transscalar Architecture of Covid-19 by Andrés Jaque and Ivan Munuera.

Here's the programme, including links to each piece of content: