With the deadline for Dezeen Awards 2020 fast approaching, we spoke to last year's victors to find out how winning has helped them win business, get international press coverage and feel like they're standing "on top of the world for a moment".

One studio said that the award “has helped the project to gain significant global recognition,” while another winner said: "Dezeen Awards occur on a different level, a different scale."

"We stood on top of the world for a moment," said another.

"Dezeen Awards are on a different level"

"The Dezeen Awards are on a different level, a different scale," one winning studio said. "It felt very rewarding getting chosen from all those beautiful projects by such a renowned jury."

Dezeen Awards 2020 is open for entries until 2 June – enter now to see how our awards could change things for you.

This year there are 36 project categories that you can enter, plus six categories for established and emerging studios. Three additional awards are handed out for overall project winners in architecture, interiors and design.

Here is what last year's winners had to say about what their victory has meant to them:

"New opportunities have arisen directly as a result of winning"

"This is one of the few awards I have won that I can associate with new opportunities arising directly as a result of winning," said Joe Doucet, winner of seating design of the year with his anti-terrorism public bench.

"New clients have referenced the awards when approaching me for some very exciting commissions," Doucet said. "I am grateful to Dezeen and the panel of judges for furthering my desire to make the world better through design."

"The whole team at Elvie were delighted to find out we had been nominated for a Dezeen award and thrilled to win one," said Andrew Carr of Elvie, which took home the award for wearable design of the year with its silent breast pump.

"As a startup, we don’t have the history and prestige of some of the market leaders," the brand said. "Winning this award brings the credibility and awareness the product deserves, and gives potential customers confidence that they are buying a truly game-changing product," Carr added.

"The award raises awareness of Elvie among the design community and is helping us reach a bigger talent pool as we grow. It means we are able to hire some of the best new design talent in the world, to help us develop more innovative solutions that make women’s everyday lives better."

"The award propelled the exposure of our firm"

Vladimir Radutny Architects won apartment interior of the year with its Michigan Loft project. They said their Dezeen Award gives them "a humbling sense of pride and accomplishment for the labor of love, an exclamation mark for a project that we are all very much proud of."

"We have been fortunate to land on a cover of a French design magazine as well as many other international and domestic publications," said Vladimir Radutny Architects.

"The award definitely propelled the exposure of our firm to the design community outside our base in Chicago," the studio added. 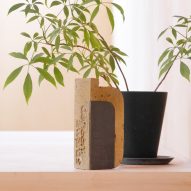 "We are optimistic as the project is continuously getting noticed. Some retail and scouting firms have inquired about using the space for their catalogue shoots and other promotional interests. It’s only a matter of time!"

"Calls from magazines all over the globe"

"Although I've won international competitions before, it meant a lot to me personally," said Van Staeyen Interieur Architecten, winner of civic and cultural interior of the year.

"The Dezeen Awards are on a different level, a different scale," the studio said. "It felt very rewarding getting chosen from all those beautiful projects by such a renowned jury."

"Winning the award created a lot of awareness worldwide. I did get calls and requests from foreign magazines all over the globe. From Korea, China, Russia, United States, South Africa, Israel, all of Europe and so on. Local press also jumped on it. The Architecture Biennale Venice did send an invitation," the studio added.

"Dezeen Award is good to create international reknown among a focused audience and the inside world of designers, architects. It got me a direct assignment for designing a restaurant. And it gave extra persuasiveness with new, nearly new and existing clients."

"Over 20 additional features and awards"

“Following the Dezeen award, this project received over 20 additional features and awards,” said Lorcan O’Herlihy of Lorcan O'Herlihy Architects, winner of housing project of the year for its MLK1101 social housing building in Los Angeles.

"These combined accolades have helped us to gain a number of important new projects that will help bring people off the street and into safe places to live."

"The award has definitely helped us getting press attention," said Office AIO, which won restaurant and bar interior of the year.

"We do see a growing interest and attention in the Chinese media community," the studio said.

"We have been getting more queries for design collaborations. For some of our clients who are more well-informed and travel internationally, Dezeen’s name does help us safeguard our reputation and gauge the client’s expectation what type of designers we are."

"It has brought in additional awards"

"The Dezeen Award has given us an international platform for increased visibility, both among press and clients," said rug company GAN, winners of homeware design of the year with Backstitch by Raw Edges.

"We think it has brought in additional awards for us and has made it easier to spread the word about our recent launches," the company added.

"Most of our clients follow Dezeen, so getting an award from you is a big endorsement. We can't say that people view us differently but we do believe that the award has made people take a second look at us."

J Mayer H, winners of residential rebirth project of the year, claimed that a "Dezeen Award is a unique global exposure of excellence in architecture."

"With our project we were able to communicate internationally the potentials of reactivating brutalist architecture for new forms of living and its relationship to nature," said the studio.

"The response was enthusiastic and it was a wonderful awards party to connect with colleagues and celebrate with old friends."

"We stood on top of the world for a moment"

Describing the moment he won urban house of the year in 2019, Kasutoshi Sasaki said "we stood on top of the world for a moment."

"I looked back on my work and felt a sense of accomplishment," he added. "We are on the next starting line now."

"What makes a difference is when the client is being told what Dezeen represents and how many entries were running for the award," said Laurent Troost, winner of rural house of the year.

"It has definitely made several clients' decisions easier," said Troost. "In terms of market positioning, it is a strong asset very respected in the architectural world."

Dezeen Awards is accepting entries until 2 June. Find out more about how to enter here.