Architect Rizvi Hassan used bamboo to build a community centre for Rohingya women and girls living in a refugee camp, where they can bathe and access counselling.

Called Beyond Survival: A Safe Space for Rohingya Women and Girls, the project is located in Camp 25, a refugee site in a forested area of Teknaf in Bangladesh.

Rooms radiate in an oval shape around a sheltered circular courtyard that is open to the sky at the middle.

The centre provides a mix of private spaces for counselling, refugee case management meetings and breastfeeding, as well as a place to gather as a group and join skills workshops.

In the summer of 2017, thousands of Forcibly Displaced Myanmar Nationals fled across the border after devastating military attacks targeted at civilians. The United Nations (UN) condemned Myanmar's actions against the Rohingya Muslim community as a genocide.

For the survivors who sought refuge over the border in Bangladesh almost three years ago, the hardship of living in cramped conditions, with only basic sanitation and a lack of privacy, is compounded by the trauma they have experienced.

Bangladeshi architect Hassan collaborated with the UN, Bangladesh-based non-governmental organisation BRAC, and the charity Unicef to design and build the bamboo shelter.

"The centre offers adolescent girls and women from the surrounding camp area a place to have a good bath a day, a place to complain about abuse and violence and a place where they can learn to create and share," said Hassan.

"Peace and conflict between the refugees and host communities will always be an issue in this context and in our belief being a good host and sharing ethical ideologies will act as small efforts to prevent conflicts."

Basic materials such as woven bamboo walls, straw thatching and tarpaulin were used as they were cheap and on hand. Like the camp, the shelter is only temporary, and the bamboo and straw will need to be replaced after a year or so. As Camp 25 sits in an area prone to cyclones, the bamboo and straw would also be less dangerous during high winds.

Toilets and bathing facilities are located in separate outhouses to one side of the women's centre. The privacy afforded here was an important part of the design.

"Usually wash facilities in the camp are out in the open and it's another issue that women are not comfortable using those," Hassan told Dezeen.

"So they get to use these whenever they want and use open spaces for drying up their clothing."

From the outside, the centre appears inconspicuous, with its low profile and natural materials left in a raw and shaggy state. This was a deliberate decision on the part of the design team to disguise the building from people – or animals.

"We found out the stories about elephants attacking villages in a focus group discussion with the locals. So we researched a bit what could be less distracting for them," explained Hassan.

"And also, we intentionally tried to avoid anything fancy in the exterior to avoid unwanted attention. [The] camp is a critical place."

Inside, the courtyard and rooms are brightly decorated with colourful flags and rugs, painted bamboo walls and chalk designs on the centre's concrete base. 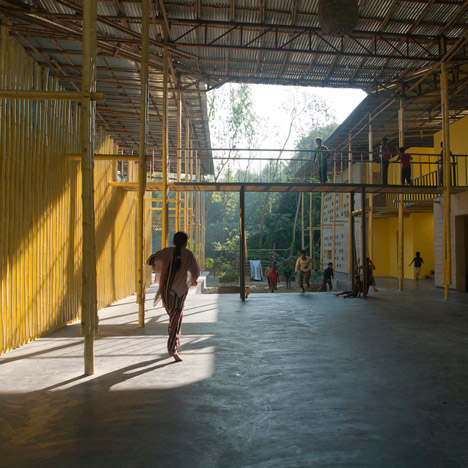 To involve the men from the community, the husbands and fathers of the centre's users were hired as daily construction workers.

"We have heard stories, how women of the community went through brutality and sacrifices to save their family," said Hassan. "It is relieving to see their men working with love to make safer spaces for them," he added.

Although the women's place won't be permanent, Hassan hopes it will make a small difference.

"Help from outside won't stay for long," he said.

"They even know that they probably won't be here for long either. All they will be left with is themselves and each other's help. And if we could provide a place to create a little bit more understanding, in the worst surviving days, maybe they could resist the brutality of the world a bit more."

To build a community centre for a refugee camp in Germany, student architects used cross-laminated timber and included a courtyard space with seats for peaceful reflection.