The first part of Virtual Design Festival's collaboration with Stockholm Design Week sees a selection of well-known Scandinavia-based designers come together in a relay talk.

What really constitutes Scandinavian design? How will sustainability play a greater part in design after the pandemic? And what can we learn from this period in time?

Those were some of the questions that Stockholm Design Week asked industry profiles for this Scandinavian Design Relay, shown as part of Virtual Design Festival.

Hear their thoughts on these and other matters as eight designers, manufacturers and architects join in on a design relay about design from different perspectives, focusing on the current challenges but also the possibilities ahead.

"What happens in a crisis and how does it affect people, our faith in the future and our creativity?" Stockholm Design Week asks.

"If the situation had been different, those of us working with Stockholm Design Week would have initiated a meeting. We would have gathered some of Scandinavia’s most interesting designers, producers and architects for a roundtable discussion on Covid-19 and its effects on our industry." 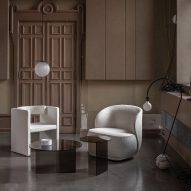 "Unfortunately, this isn’t possible to do at the moment, so instead we have initiated A Scandinavian Design Relay, where these professionals give a fresh overview of the Scandinavian design world’s thinking regarding how the design world will look once this crisis is behind us," the design organisation said.

Space Copenhagen was founded in 2005 by Signe Bindslev Henriksen and Peter Bundgaard Rützou. The brand has shown at Design Shanghai and renovated Arne Jacobsen's iconic hotel in the Danish capital.

Italian designer Luca Nichetto has a studio in Stockholm, as well as one in Venice, Italy, and has worked with Scandinavian companies including heritage brand Svenskt Tenn and furniture company Hem.

Swedish designer Anya Sebton's products are manufactured by companies including Lammhults and Asplund, and can be found in airports, embassies and museums worldwide.

Massproductions, a Swedish furniture brand, recently showed its wares in an exhibition stand made out of prefabricated plaster tiles, and released a sofa that mimics welded steel crowd-control barriers.

Iceland's Katrín Ólína calls herself an industrial-designer-researcher-artist-thinker and has created furniture made from steel tubes shaped with an old exhaust bending machine, and jewellery that combines digital and bronze-age techniques.

Form Us With Love

Swedish design studio Form Us With Love was founded in 2005. Its latest product is a new mix-it-yourself cosmetics brand, Forgo, that minimises carbon emissions, and it recently also created a modular bench seating system to give people privacy in public spaces.

Together with Stockholm Furniture & Light Fair, Stockholm Design Week has established itself as the most important week of the year for Scandinavian Design. The week is held annually in February and is a meeting point for buyers, architects, designers, press and influencers from all over the world.

Stockholm Design Week takes place in a variety of venues across the city, from galleries and showrooms to dinner parties, after fair meetings, opening cocktails, museums and cultural institutions. The upcoming edition, Summer Design Week, will be held on 17-23 August 2020. The next Stockholm Design Week will take place on February 8-14, 2021.