Swiss firm Herzog & de Meuron and Canadian studio Quadrangle have unveiled plans for a super-skinny skyscraper in Toronto that will rise 324 metres.

The 87-storey skyscraper, called 1200 Bay Street, is proposed for a site in the city's Yorkville area on the northwest corner of Bay Street and Bloor Street.

If completed, it would be Canada's tallest skyscraper, taking the title from Foster + Partners' 306-meter-tall One skyscraper that is already under construction on Bloor Street.

The 324-metre-high building would have a 3:1 construction ratio, meaning that the length of its site is approximately three times that of its width. Its height and slender proportions give way to the description of it being a supertall and skinny skyscraper.

Renderings show the slender design would comprise timber roller shades and an outer layer of open-jointed glass. Units would have interior glazing with floor-to-ceiling operable windows, and the shutters would regulate daylight and heat. 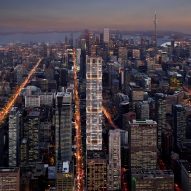 Its structural core is intended to be on the western facade to maximise the usable area of the floorplate. This would also provide privacy from adjacent developments to the west.

Herzog & de Meuron and local studio Quadrangle were enlisted by Dutch management companies Kroonenberg Groep and ProWinko to design the mixed-use tower to replace a 16-storey commercial building from the 1960s that has offices and retail spaces.

The first 16 floors of 1200 Bay Street would comprise retail and office functions, and a level with private amenities would separate these from the residences above.

It would include 332 condominium units, ranging one-bedrooms to multi-storey penthouses, that would be spread over 64 floors.

On the top three floors, there would be a restaurant and lounge, and a triple-height lobby for tenants will be located on Bloor Street.

Images are by Herzog & de Meuron.