Japanese studio Ryuichi Ashizawa Architects has attached an egg-shaped tomb to an "unconventional" house in the city of Sakai, Osaka prefecture.

Called Minami Hanada Tomb, the project plays on idea of the Mozu Tombs – a series of vast ancient burial sites with distinctive raised mounds that the city is famous for. However, due to zoning laws, the new tomb is purely symbolic.

"After investigation, it turned out that creating the cemetery in the residential area is legally prohibited at present," said Ryuichi Ashizawa Architects.

Instead, the studio approached the tomb concept from a metaphorical perspective.

The house, which represents life, has spaces designed for living, while the tomb is an empty – or dead – space.

"Rooms are typically based on functions that are the everyday activities of residents, making it challenging to plan blank spaces that do not have specific function," said Ryuichi Ashizawa Architects.

"The house is unconventional, containing a space that feels dark, and symbolises death."

The curving tomb's shell was made from a wooden frame filled in with a mix of mortar and earth to create an organic finish.

Inside, the 6.4-metre-high empty space is designed to provide a place for private contemplation and reflection. An oculus at the top of structure lets light filter in to the space.

A curving bench was placed on the ground floor and small wooden steps attached to the side of the tomb lead to an elevated platform that is level with the first floor of the house.

In the middle, a smaller dome conceals the house's bathroom, accessible by an arched door. A second dome under the stairs conceals a laundry cubby.

The main house was constructed from a baked cedar wood frame that creates with an inner and outer layer. Glass walls ring the perimeter corridor, which has a traditional Japanese earthen floor.

Bookshelves are built into four corners of the inner wall facing outwards. The glass doors can pull back to open this space to the street.

"The bookshelf and the ground floor responded to the resident's request as they wanted to create a library-like place where local children and other nearby residents could stop," said Ryuichi Ashizawa Architects.

There are two rooms on the ground floor, which can be separated or joined together by shoji – translucent screen partitions with a lattice frame. The kitchen, with built-in wooden cabinets is at one end, while the living room is at the other.

Upstairs, there are two bedrooms separated by a small corridor. Translucent sliding screen doors and walls give privacy while allowing light from the glazed outer envelope to enter.

The space between the inside and outside of the house forms a loggia, with a decked floor and a waist-height railing. A galvanised steel roof tops the main house, overhanging slightly at the edges. 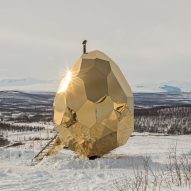 Eight egg-shaped buildings from around the world

In summer, a breeze can be created by opening vents in the dome to allow air to pass through into the living space. In winter, the earth floor helps trap heat in the space between the inner and outer layer.

Existing plants and trees from the old house's garden have been preserved, and an old stone fence has been dismantled and turned into paving stones.

Ryuichi Ashizawa Architects was founded by Ryuichi Ashizawa in 2001. The studio used plants climbing over a mesh structure to help shade a concrete house on Okinawa Island.

Photography is by Kaori Ichikawa.