Italian product design students Francesco Rogante and Ilaria Pirro have developed a rotating lamp that uses the electrical conductivity of liquid in place of a switch.

Called Circuiti Liquidi, or liquid circuits, the project aims to combine two elements that are generally seen as an oppositional pairing: liquid and electricity.

The tubular lamp has two bases, which the user alternates between as they turn the lamp upside down and back again in order to activate the light.

"We wanted to dispel this belief that liquid and electricity are in contradiction with each other," Rogante and Pirro told Dezeen.

"In pursuing the principle of contradiction, we have also made the user the protagonist who intervenes directly in switching on the lamp by rotating the object with an unusual gesture compared to pressing the switch," they added.

Circuiti Liquidi's main structure is made from a rectangular, tubular glass ring that has been cut into three parts, and secured into place using 3D-printed caps. This allows for easy disassembly and replacement of the inner liquid.

One of the three air-tight sections contains a blue liquid, while another contains electrical cables, which are fed out of the lamp and connected to an ordinary socket.

This circuit must be closed for the lamp to switch on, so the liquid performs the same role as a traditional on-and-off switch.

The cables that connect the LED to the electrical current have been cut and fixed inside one of the 3D-printed plugs, allowing two sections of copper cable to pass through.

Once Circuiti Liquidi is turned upside-down, the blue liquid comes into contact with the two copper ends, closing the circuit and in turn making the light come on.

"The principle of conductivity of the liquid now comes into play: inside the liquid there are ions, atoms or molecules of positive or negative sign that carry the electrical current," explained the duo.

"When the position of the lamp allows the liquid to touch the copper ends, the flow of current is restored and current flows to activate the LED."

"Consequently, when the lamp is rotated the liquid moves away from the copper ends and the current flow is interrupted, turning off the LED," they added.

According to the designers, the production of the lamp was a "long and meticulous" process that involved several prototypes made from plexiglass tubes that they had to fold by hand using heat to find the correct shapes and proportions that would work with the circuit. 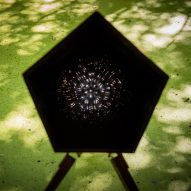 The biggest challenge, however, was the design of the 3D-printed rubber caps.

"Since the structure is made by hand, the junctions between the three pieces of glass were not precise," they said. "We had to change the tolerances for 3D printing to ensure that the closures were waterproof."

The duo wanted to translate the physical and chemical principles and operations of the ordinary light switch into a gesture rather than an object.

"The benefit in using a liquid as a switch is that it's a different, more interactive approach to using a normal lamp," explained Rogante and Pirro, who are third year students from the Nuova Accademia di Belle Arti (NABA) in Milan.

"A new gesture is born, a new way of living and using the object, which makes the user the protagonist of a first-person magic," they added.

The Circuiti Liquidi project, which was conducted under the supervision professor Filippo Protasoni, is one of many that include unconventional materials. Other designers have created lighting from red cabbage leaves, dried sheets of algae and coffee waste.

Alternatively, Dutch designer Teresa van Dongen created a telescope-like tube that experiments with using bacteria found in the muddy soil of rivers and lakes as an electricity source.