The Dutch designer discussed his work with Dezeen's founder and editor-in-chief Marcus Fairs.

A Design Academy Eindhoven alum, Eek operates out of a former Philips factory in Eindhoven, which he has renovated into a cultural centre that comprises his studio and workshop, a restaurant, an art gallery, a hairdressers and, from October 2020, a hotel. 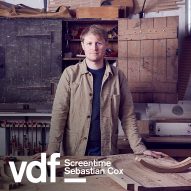 Eek described his studio as "his own world; a dynamic centre where creativity, production and sales go hand in hand".

He is known for a rustic style, often using materials such as wood, metal and ceramics in his products.

The designer first applied this aesthetic to his graduation project, a collection of scrap wood cupboards made using salvaged floorboards and planks.

He has since applied this design approach to numerous projects including a collection of furniture and homeware products for IKEA that showcase imperfections rather than hide them.

He has also previously converted a 100-year-old barn in the Friesian village of Woudsend into a rustic guesthouse, highlighting original features like its aged timber roof.

This conversation is sponsored by Philips TV & Sound and is part of our Screentime series for Virtual Design Festival. The last episode of the series will feature a conversation with Anna Murray from London-based design studio Patternity.