The Montréal studio designed the barn to improve the quality of life for both the animals and the workers at organic cheese farm Au Gré des Champs.

To create a building that would blend into the landscape harmoniously La Shed Architecture chose to use materials commonly found on farms to construct the barn.

The building's framework was made from spruce, with hemlock planks used for the walls. Its sheer facade was constructed from two layers of polycarbonate sheets – one clear and one translucent.

The decision to use a translucent exterior for the barn was based around the idea that natural light enhances both well-being and productivity.

"For visitors, these translucent facades allow them to make the link between interior spaces and exterior grazing spaces, and thus better understand the living environment of cows," said Samuel Guimond, one of the studio's architects who worked on the project.

According to the architect, during the day the walls let through so much natural light that it feels like being outdoors, while at night the barn lights up like a lantern.

"By day it feels like being outside," he told Dezeen.

"At night, the opposite effect occurs, and the artificial light illuminating the interior of the barn filters through these translucent walls. The barn, therefore, becomes a landmark in the middle of the fields, like a large luminous lantern."

La Shed Architecture also used polycarbonate sheeting because it exposes the internal structure of the wall, adding to the barn's contemporary character.

Galvanised sheet metal was used for the overhanging roof, which offers shelter for visitors when the farm hosts events.

Large shutters on the longitudinal walls allow for natural ventilation, and in winter time the space is heated by the cows' own body heat.

The studio also had to take into account technical restraints related to free-stabling, including having large spaces for the cows as well as specific routes for milking cows.

"The farming family wanted to offer both their cows and their employees a better quality of life," Guimond said. 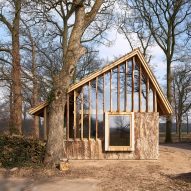 "For the cows, this new barn meant the end of tie-stall housing, where cows are confined in stalls; they would henceforth operate in free stalls, allowing them greater freedom of movement," he continued.

"For the employees, this new barn should allow them to work in a more spacious, bright and pleasant environment."

In addition to spatial constraints, the studio had to take the habits of the barn's new inhabitants into consideration.

"We had to create a route to facilitate the movement of the cows in the building according to the order of the tasks to be accomplish during the day," Guimond explained.  "Cows love stability and routine."

Other innovative barn buildings include HilberinkBosch Architects' asymmetrical barn made from wood felled from own land and Asher deGroot of Motiv Architects' Swallowfield Barn that was built together with the local community.

Photography is by Maxime Brouillet unless otherwise stated.