Spanish artist SiiGii has designed a wearable, inflatable lilo from latex that enables users to lounge on a pool float in the summer without aggravating their allergy to the sun.

The blow-up bathing suit, titled Floating Above Limits, is part of SiiGii's wider collection S.A.D: Sun Allergy Diaries, which includes three designs that aim to find ways of overcoming the artist's rare condition that makes them allergic to the sun.

Made of latex, the all-in-one bathing suit wraps around the head like a swimming cap to ensure maximum coverage, and features two inflatable areas behind the head and around the body in the shape of a pool float.

When the suit is inflated, the wearer can float on water, bathing in the sun – something they would otherwise be unable to do due to their allergy.

"I grew up on the beach. At age 11, I developed an allergy to the sun which awakened a feeling of artificiality in me," the designer, who was born in Spain, explained.

"Suddenly I had to start protecting myself from nature... in conflict with something considered so beautiful, nourishing and relaxing. Ever since I have been developing systems of protection so my story could have a happy ending."

"Floating Above Limits explains that when we cooperate with our conditions instead of rejecting them, we can enter uncharted territories," SiiGii contined.

"Simply put, I could never lay on a float and relax in the sun. I had to become the float. The power in overcoming myself so that I could have the experience is the meaning. Adaptation sent me from feeling inferior to feeling extraordinary."

The blow-up suit is made from latex sheeting that is punctuated with three Boston valves to allow the wearer to inflate and deflate themselves when required.

The all-white design is broken up by the shape of a black bathing suit, which wraps around the body. According to the artist, this element "frames the body" within its bulbous structure.

As SiiGii told Dezeen, incorporating this element allowed them to still be themselves while wearing the unconventional blow-up suit.

"In this piece you can see that cooperation – becoming what is going to make me rise (the float) while still being myself (the bathing suit element), relaxing (floatation element) through artificiality (restrictive latex in unnatural colors such as pure white and black)."

SiiGii made the suit in their own studio using just glue and a hand pressure roller, but, as the artist explained, combining "the extremes of 'full of air vs no air' in one design was the biggest challenge.

When deflated, the user can walk around more freely. Thanks to the flexible material choice of latex, the suit "actually has a lot of mobility", said SiiGii.

SiiGii travelled back to their hometown in Spain to test the inflatable suit.

"Full of adrenaline, I pushed myself backwards into the ocean to find the most special moment of my life. I was floating with no issues in open water under intense sun, feeling like never before," they explained.

"I remember seeing the sun shining on the white latex so beautifully, the sparkly blue water and the fluidity of the ocean rocking me slowly into a state of bliss."

SiiGii is not the only designer to experiment with inflatable fashion. Harikrishnan created a series of billowing latex trousers that fit snugly at the waist and ankles, but balloon out around the wearer's thighs. 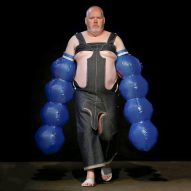 Photography is by Marc Espinosa.