Canes of bamboo interlace across the ceiling to form a canopy above guests in this bar in Beijing, China designed by Imafuku Architects.

Dongshang – which is shortlisted in the bar interior category of this year's Dezeen Awards – offers an extensive menu of sake and whiskies from Japan, as well as a selection of Japanese dishes.

When it came to designing the interiors of the bar, Imafuku Architects wanted to use a material that spoke of the bar's Japanese menu, as well as its Chinese location – bamboo immediately came to mind.

"The history of planting and using bamboo in these two countries can be traced back to ancient times," explained the studio. "Both Chinese and Japanese people have utilized bamboo as a material for construction, furniture, containers and even art pieces."

"Dongshang invites guests on a story of traditional aesthetics and crafting techniques of the two countries through the contemporary reinterpretation of bamboo." 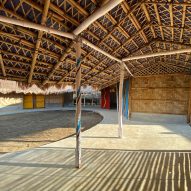 Centre for displaced Rohingya women built from bamboo in Bangladesh

The studio had also become particularly inspired by the Seven Sages of the Bamboo Grove, a group of Chinese scholars, musicians and writers from the third century who would convene in a bamboo grove to escape the turmoil and corruption associated with the royal courts at the time.

Guests are led into Dongshang through a long corridor. The bottom half of the walls here are lined with dark grey terrazzo, while thin strips of bamboo have been affixed to the upper half with brass nails.

Some of the bamboo strips arch up and away from the wall to form a lattice across the ceiling. Spotlights have been installed directly above the latticework so that, when switched on, light dapples the surrounding surfaces much like "sunshine filtering through tree leaves".

The terrazzo and bamboo-strip walls continue into Donshang's main dining space. Mushroom-coloured sofas and armchairs have been dotted throughout, arranged around square wooden tables.

Canes of bamboo have been arranged into a criss-cross-pattern "canopy" on the ceiling, a feature that the studio hopes will lend the room a cosier and more intimate ambience.

More bamboo canes appear at the rear of the room but have been stood upright to create a fluted feature wall behind the drinks bar. Backlit liquor bottles are openly displayed on three-millimetre-thick shelves crafted from steel.

A splash of colour is offered by the high chairs that run around the bar counter, which are upholstered in sapphire-blue velvet.

Dongshang restaurant will compete in the 2020 Dezeen Awards against projects such as J Boroski by Atelier XY, which is decorated with over 1,000 insects, and The Berkeley Bar & Terrace by Bryan O'Sullivan Studio, which includes a cosy, pink-hued snug where guests can enjoy their cocktails.

Photography is courtesy of Ruijing Photo.