In the third video of our Design for Life collaboration with Dassault Systèmes, Studio INI founder Nassia Inglessis describes how technology enables her to create interactive spaces.

Inglessis is the third designer to feature in the Design for Life collaboration between Dezeen and Dassault Systèmes, which highlights designers who are using technology and research to build a better world.

The Greek engineer and designer is the founder of Studio INI, an experimental design practice based between London and Athens, and winner of the  Dezeen Awards 2020 public vote for designer of the year.

"Studio INI couples rigorous scientific and design research in order to create immersive experiential environments," explains Inglessis in the video, which was filmed by Dezeen at her studio at Somerset House in London.

The practice is known for creating intricate architectural installations that respond to the bodies of visitors.

Urban Imprint, an installation designed by Studio INI that appeared last year at A/D/O in Brooklyn, featured a canopy that opens up around visitors' heads in reaction to the weight of their footsteps.

The installation was a reaction to the rigidity of urban space as experienced by humans, in contrast to natural environments which, according to Inglessis, react to the presence of humans.

"Urban Imprint was a way of completely reimagining an urban landscape to be closer to how we experience a space in nature," she explained.

"It's a malleable, flexible environment that basically would construct around its inhabitants."

As a visitor steps into the installation, a flexible floor depresses around their foot, triggering a system of pulleys that tighten and lift the roof into a dome shape above the inhabitant's head.

The process of designing the installation involved reconfiguring materials often used in construction to make them flexible and reactive. 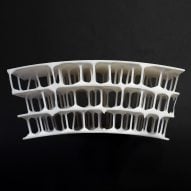 "We took all the materials that are in an urban environment - cement, rubber steel - and had to find a way to make them expand and return," said Inglessis.

At London Design Biennale in 2018, Studio INI represented Greece with an installation named Disobedience situated in the courtyard of Somerset House.

"Disobedience is a 17-metre kinetic wall that you can walk through," said Inglessis.

Visitors were invited to walk along a platform flanked by flexible walls that bulge open around them as they pass through the installation.

"It's a spring made out of steel, which basically flexes open in response to the weight of your step," the designer explained.

"Rapid prototyping and digital fabrication allows us to very quickly go from the digital to the physical, and also allows us the precision to try really complex designs," said Inglessis.

This process allows the designer to realise environments that exemplify the principle that people should be able to interact with the spaces they occupy.

"Architecture shouldn't create limits or borders, but it should really create possibilities for exchange and for interaction," the designer stated.

Photography is by Luke A Walker except where stated.

The talk was followed by a video profiling Austrian designer Julia Koerner, in which she shows how she uses technology to apply architectural techniques to fashion and costume design.

In the next instalment of the series, Exploration Architecture founder Michael Pawlyn explained how biomimicry allows architects to have a positive impact on the environment.

In the coming weeks we will also be publishing a video profiling the work of DS Automobiles design director Thierry Metroz.