MIT researchers Jiani Zeng and Honghao Deng have developed a "truly minimalist", 3D-printed flacon, which is entirely transparent at first glance and only reveals its branding when it is tilted at just the right angle.

If the Nseen bottle was standing in front of a sign, onlookers would be able to see straight through it to read the words behind, without being able to see the writing on the bottle itself.

That's because the writing is covered in a lenticular lens – a corrugated sheet made from rows of convex, magnifying lenses.

Much like a glass of water refracts light around a straw to make it appear in a different position, this sheet bends light around the label at specific angles, rendering it effectively invisible and instead magnifying parts of the background behind.

Yet at other angles, the lenses are flat to allow light to pass through, thereby divulging the writing underneath.

According to Zeng and Deng, their design for the Nseen bottle marks the first time that such a sophisticated effect has been produced using 3D printing.

"3D printers that can print glass-like materials are relatively new in the industry," said Deng, who is a computational designer while Zeng works in industrial design.

"And we are the first group of designers and researchers making precise control of 3D printed lenticular effects possible." This is thanks to the duo's novel Illusory Material method, which allows designers to print using lenticular lenses while imbuing each voxel, or three-dimensional pixel, with a different colour, texture and refractivity.

The final design is then realised using a multi-material, poly-jet 3D printer, such as the ones created by US manufacturer Stratasys. Unlike a traditional, Fused Deposition Modeling (FDM) 3D printer, these can create objects that are both transparent and fuse two or more different materials.

"In a traditional workflow, the models you design and send to regular 3D printers are like an empty shell that only contains surface information. Those printers can only recognise the surface information and help you print the geometry, mostly in a single material or colour," Zeng told Dezeen.

"But Illusory Material is designed with embedded metamaterial information – think of it as a model full of colours and different material properties in different voxels. The Stratasys printer can read this information and print artefacts with layers of materiality that reveal multiple expressions."

The entire Nseen bottle, including the transparent body, the lenticular lenses and the writing hidden underneath as well as the solid black strips on either end, is created in one single print. 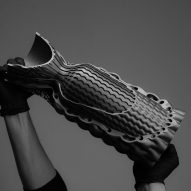 The designers sees the Nseen bottle as a test case for showing off the capabilities of their system and its possible benefits.

"Aesthetically, we want to show designers that a truly minimalist design can co-exist with delivering clear product information and instructions, even when working with transparent materials such as glass, acrylic and resin," said Zeng.

"Functionally, the same design can be applied to different use cases such as delivering a personal message to a specific user," she continued.

"Imagine that you don't have to hide your pill bottle and it can be left out just like any other items in your home without showing sensitive information. It can also be used as an embedded authentication code for luxury brands, which is impossible to be copied and faked."

The Illusory Material system also allows for the creation of objects that change colour based on the angle from which they are viewed, simply by layering different shades underneath each lenticular lens.

This is exemplified in the duo's prototype Unream lampshade, which features sinuous lines that go from blue to pink and purple as the viewer walks past. Ultimately, the aim of the project is to change the face of surface design by opening up a new world of dynamic, responsive textures through lenticular 3D printing.

"We aim to push past the limitations of traditional design, removing the need to simply replicate materials that already exist, creating dream-like material expressions that only exist in the digital world," the duo writes.

Last year, Canadian camouflage company Hyperstealth Biotechnology used lenticular lenses to create an "invisibility cloak" that could hide people and entire buildings, for use by the armed forces.

Seoul design studio Orijeen previously used the chameleon-like quality of lenticular lenses to create a series of furniture that changes colour based on the viewing angle.