London designer James Whitaker's starburst-shaped shipping container house for Joshua Tree, California, has gone on sale for $3.5 million before construction has even started.

Named 0 Wagon Wheel Road after its location one mile from the entrance to Joshua Tree National Park, the unbuilt property is listed on a number of real estate sites.

Whitaker, whose project became a viral sensation when unveiled in 2017, said construction is slated to begin in the middle of next year.

"We're currently working with Giant Containers who are based out of Toronto," he told Dezeen. "They are going to do the metalwork component of the build and all being well construction will start in the middle of next year."

The listings, which include floor plans and renderings, show that once built the house will be formed from an "exoskeleton" made of shipping containers painted white.

The interiors will have bright white walls and concrete floors, with square windows in the containers offering views of the desert surroundings.

"The home's exoskeleton of cuboid forms emanate in all directions oriented to capture the sheer beauty of the vistas, sky and desert-scape," describes the listing in Engel & Völkers.

Whitaker first unveiled the project in photo-realistic renderings in 2017  – becoming one of Dezeen's most popular stories that year.

The house was designed for film producer Chris Hanley, who behind movies like America Psycho, and owns a 90-acre (36-hectare) property near the Joshua Tree wilderness preserve.

He tasked Whitaker to design a house based on his conceptual proposal for offices made from shipping containers called Hechingen Studio, which has also never been built.

The designer told Dezeen the multi-million-dollar listing follows huge interest in the house since it was first unveiled.

"The enquiries from bands wanting to launch world tours at the house and fashion brands wanting to do catwalk shows there has been staggering so hopefully 2021 will be the year it all comes together!" he added.

Whitaker, who leads his eponymous studio in London, has also designed a Canadian lakeside residence composed of prefab modules linked like a "daisy chain". 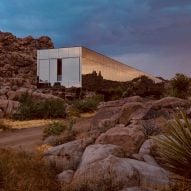 His client Hanley meanwhile has completed a mirrored-glass residence on his plot in Joshua Tree called Invisible House.

Hanley worked with architect Tomas Osinski to develop the slender steel-frame house clad in mirrored, tempered glass typically used for skyscrapers. The property is available to rent for filming, photography and events.