Jorge Ramón Giacometti Taller de Arquitectura designed Casa Ocal to suit its hard-to-reach location in the mountains in the north of Ecuador.

Casa Ocal is raised on pilotis to allow rainwater to flow unobstructed down the hill beneath the house. The stilts also allowed for the creation of a level ground floor without any laborious and costly excavation.

Its gable end faces down the slope and is formed of a large covered porch that frames views of the mountains.

Because of the difficulties presented by the location, the architects decided to whittle their design down to the simplest of forms and build it in a modular fashion.

"We were asked to build a 110-square-metre house with a minimum budget, in a hard-to reach-place in the Ecuadorian mountains," said the studio.

"During the whole challenge, we tried to reduce the complexity of the construction system and minimise the amount of disruption."

Construction for Casa Ocal took just five months. The beams and joists are made of eucalyptus wood, a tree species that was originally brought over from Australia but now grows in Ecuador's tropical hills.

Eucalyptus was also used for the tongue and groove cladding around the exterior.

Recycled metal was turned into the steps that lead up from the ground to the house's front porch, as well as the back door and a third door in the middle of one side.

Inside, the house is split by a central corridor from the front to the back door. An open plan kitchen and living space open on to the porch, with the kitchen occupying one side. 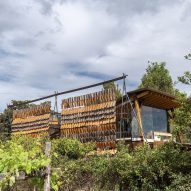 Reclaimed metal has also been used for the kitchen cupboards, countertops and splashback, its weathered surface providing a dark contrast to the light timber walls.

Floor-to-ceiling glass between the living area and the porch allows for more views of the landscape. On the other side of the room, a corner is occupied by a wood-burning stove with a metal chimney.

Beyond the communal areas, a corridor divides three bedrooms and a bathroom, which features a bowl-style sink.

More residential projects in Edcuador include this prefabricated cabin made of recyclable materials and a house screened by tiles hung on steel cables.

Photography is by Claudia Muñoz Karig.