Architecture studio MAPAA has created a barrel-vaulted concrete office for a family-run wine business based in Pirque, Chile.

MAPAA used pigmented concrete to create a trio of arching vaults over the offices, which are raised on trusses to sit against the sloping site.

Built for the Viña Haras de Pirque vineyard in the Maipo River valley at the foot of the Andes mountains, the form takes cues from traditional cellars found in the area.

"The barrel vaults reference the ancient underground cellars used for the storage of wine, characteristic of the winemaking tradition of the central area of our country," MAPAA co-founder Cristián Larraín told Dezeen.

Wooden formwork and a series of trusses were used to create the archways, which frames a wall of glazing looking out over the vineyards and an olive grove.  A wide balcony runs along the front of the offices.

The board-marked concrete walls have been left bare in the interiors, contrasting with ceramic floors and doors and furniture made of wood.

The office is shared by a father and son, who wanted separate but connected workspaces. Their private offices are at either end of the building on either side of a shared central space. 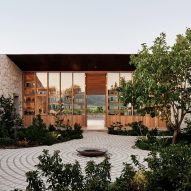 This area is oriented around a huge Italian tapestry belonging to the vineyard's owners, which separates a smaller reception area and a larger meeting area.

MAPAA designed the walls and ceiling around accommodating this large-scale artwork.

"The challenge was to find an adequate void that would allow us to fulfil this condition," explained Larraín

"Finding in the barrel vault that spatiality capable of responding to the problem of a neutral spatiality, of filtered light and that, in turn, is strongly rooted in the traditional forms used in the construction of the place."

The office also has bathrooms and a kitchen for entertaining. A wine cellar is located underneath.

MAPAA was founded by Cristián Larraín and Matías Madsen and is based in Santiago.

More examples of vineyard architecture includes a French winery carved out of stone by a robot and a winery in Greece with an undulating brick facade.