Canadian studio Paul Bernier Architecte has designed a contemporary extension for a lakeside dwelling in Quebec made of timber and stone.

The project, called Cottage on the Point, entailed the renovation and enlargement of a log cabin that has been in one family for 40 years.

The dwelling is located in Lanaudière, a scenic region in central Quebec. Built atop a stone foundation, the cabin is anchored to a forested site that juts into a lake.

Guided by notions of "contrast and continuity," the Montreal studio of Paul Bernier Architecte sought to overhaul the single-storey building in a way that respected its rustic aesthetic yet didn't mimic it.

"The solution was not to pretend that this addition had always been there," the team said. "The project had to allow the old and the new to be clearly visible."

The architects also had to be mindful of site limitations. Due to the building's close proximity to the shore, the cabin needed to expand upward rather than outward.

In response, the team added a rectangular, upper volume clad in dark-stained cedar. The east elevation features a tall, vertical window that helps carry daylight to the home's lower level.

The original building's ageing roof was removed and replaced with a Douglas fir version. Its shape and slope are derived from its predecessor.

"It is the meeting of two eras," the studio said of the project. "The addition is a clean and monolithic volume but whose material and colour echo those of the original cottage."

Inside, the cabin features bright, cosy rooms and ever-present views of the water. 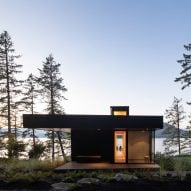 In the main living area, a stone fireplace was restored and is now visible on all sides. A cathedral ceiling with exposed timber beams creates a lofty atmosphere.

A stairwell with a large window leads up to the addition, which holds a master suite and two bedrooms.

In the upstairs corridor, a portion of the floor is made of translucent glass, which enables light to pass down to the lower level.

"This promontory offers an exceptional view of the lake and an opening to the sky that did not exist on the ground floor," the team said.

The only addition to the bottom level was a screened porch, located on the home's south side.

Illuminated by two skylights, the porch "offers another place to enjoy the outdoors in a space bathed in the natural light that reflects on the water."

Paul Bernier Architecte has completed a number of distinctive projects in Quebec, including a rural home wrapped in blackened timber and weathering steel, a cedar-clad cabin near Grenier Lake, and a mixed-use building in Montreal with a perforated metal screen on its exterior.

Photography is by Raphaël Thibodeau.