The five are among the latest 25 judges to be added to this year's star-studded jury, joining Ole Scheeren, Kelly Wearstler, Hanif Kara and Chitra Vishwanath, who were announced as judges last week.

Dezeen Awards 2021 is open for entries until 9 June but if you enter before 31 March you can save 20 per cent on entry fees!

Receiving more than 4,300 entries from all over the world last year, Dezeen Awards has quickly become the benchmark for international design excellence and the ultimate accolade for architects and designers everywhere.

They will be joined by fellow architects Lina Ghotmeh, Christina Seilern and Carme Pinos.

They will be joined by Hector Esrawe, whose studio was named interior design studio of the year at Dezeen Awards 2020 and Rosie Morley of Fender Katsalidis. 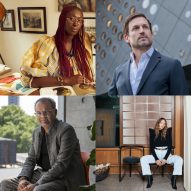 Dagmar Štěpánová of Formafatal, who won emerging interior design studio of the year at Dezeen Awards 2020, will sit with London-based interior designers Sophie Ashby and Fiona Blanchot to determine the interiors shortlist later this year.

Artist Olafur Eliasson and architect Sebastian Behmann will judge the design categories with industrial designer Karim Rashid along with Sumayya Vally, who was recently named as one of Time magazine's leaders of the future.

They will be joined by founders of Kenyan Studio Propolis Naeem Biviji and Bethan Rayner, South Korean designer Kwangho Lee as well as Mark Eley and Wakako Kishimoto of UK-based studio Eley Kishimoto.

Dutch designer Richard Hutten will also be on the design jury alongside Kim Colin of Industrial Facility.

We'll be announcing the final set of 2021 judges to complete the panel of 75 industry-leading professionals soon, so keep your eyes peeled!

You can sign up to our newsletter to stay up to date with all awards-related news at www.dezeen.com/awards/subscribe.