After a visit to a natural science museum, the Spanish studio was inspired to create "beautiful and harmless" versions of the insects they saw on display.

MUT's Beetle panel range includes 12 different designs, each made from a combination of six different panel shapes. All are designed to emulate the patterns and colours found on a beetle's shell.

One design has a round textured black body, featuring a fluorescent speckled top panel that has been made using Kvadrat's Galaxy fabric, and is held together with a yellow wooden mount.

Another panel consists of two sandy beige panels, one finished with a collection of geometric shapes made from individual lines – a design by Febrik called Razzle Dazzle.

Other beetles include one with a blue base topped with a brown panel covered in red speckles, and another made from a combination of navy, orange and burgundy panels.

There is a range of eight fabric finishes available to choose from, and each comes in an array of colours – from pistachio and toffee, to ginger and blossom.

The beetles are then mounted to the wall using supporting stands made from oak, which can be stained in any of the coloured tints on Sancal's chart, such as Klein blue, nut, or rose.

MUT was founded in 2010 by Alberto Sánchez and Eduardo Villalón. The studio's beetles build on Sancal's existing range of acoustic panels, which also includes the Tartana ceiling-mounted fabric hood. 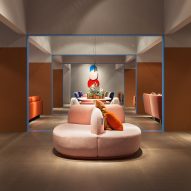