Artist Joep van Lieshout has designed a brutalist-informed residential neighbourhood and a cluster of cultural buildings in Rotterdam as a "new model for urban renewal" that aims to foster an artistic community.

Named Brutus in reference to the brutalist-informed architecture, the development is being designed and funded by Van Lieshout and property developer RED Company for Rotterdam's M4H harbour area.

The development was designed with the aim of creating a neighbourhood that artists can live and work in. It will contain a combination of affordable working and living spaces for artists, as well as cultural facilities including a museum, art depot and ExpoBrutus exhibition space.

"[It] heralds a new model for urban renewal that does not automatically push out creatives once neighbourhoods upgrade," said Van Lieshout's studio.

The development will consist of a series of blocky volumes containing cultural buildings connected by staircases, hallways and ramps.

Rising above the low-rise cultural buildings will be three highrises, designed by Van Lieshout in collaboration with architecture firm Powerhouse Company, measuring 140, 90 and 55 metres high that will contain a total of 750 residential units.

"It is a brand new design but as a sculptor I always work with combining and balancing shapes, volumes and masses and after hundreds of drawings and models the present shape came floating to the surface," Van Lieshout told Dezeen.

Artist Van Lieshout, who is best known for his furniture and urban sculptures, and project developer RED Company are financing Brutus together with Redwood Capital Investments and NIBC Investment Partners.

Van Lieshout is already based in the M4H area, where he runs the AVL Mundo non-profit foundation. It was founded to show the work of other artists and display Van Lieshout's large-scale pieces. "In 2008 at the height of the credit crisis I was able to buy my 2,000-square-metre studio for a very low price since the area was know for crime and prostitution," he said.

"In the rolling years I was able to buy the adjacent plots and now me and the AVL Mundo foundation own 11,000 square metres. I always believed in the potential of the area and started to develop plans for a larger developments."

The area was also the setting of his 2001 project AVL-Ville, which saw the artist declare a free state in the harbour, and Brutus is a continuation of this project.

"This is AVL Ville 8.0 or AVL Ville 2050, this project is driven by the same desire to create space for artists, an alternative live-work community that is sustainable," Van Lieshout said.

Atelier Van Lieshout's workspace will remain as part of Brutus and feature a transparent facade to let visitors watch the art being made. A 2,250 square-metre section called The Maze will showcase installations, sculptures and other work by the studio.

"I believe in another way of being involved with art: instead of making individual artworks for the market I want to make a whole world with many artworks – the artworks will enhance and contradict each other and challenge the visitor," Van Lieshout said.

"You could call this a labyrinth or maze in which artworks will enhance and contradict each other and challenge the visitor." 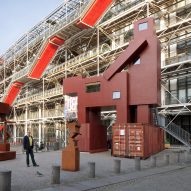 "For this maze I need very large spaces to build this life work. The result of the investment in this large development that includes exhibition spaces and housing will make these spaces and some seeding money possible," he added.

Brutus could become a reality within the next five years, with the project currently awaiting approval from the city's zoning commission.

The project's backers intent to begin construction in 2023 with the development set for completion two year's later.

Van Lieshout's previous work includes installations, such as his controversial Domestikator sculpture, which was cancelled by the Louvre as the museum found it "too sexual," and product design such as his AVL Spider Chair for Lensvelt.

Images are by Atelier van Lieshout.