Israeli studio Paritzki & Liani Architects has left an opening in the facade of its latest project, Eucalyptus House, to create space for an old tree.

The eucalyptus tree is understood to be one of the oldest specimens of its kind in the Neve Tzedek area of Tel Aviv, so architects Itai Paritzki and Paola Liani were keen to celebrate it within their design.

As well as having a facade designed to frame the tree, the 382-square-metre house also has a layout that makes it possible to see the trunk and foliage from several different rooms.

The architects describe the eucalyptus as a "himorogi", a Japanese word that relates to sacred spaces or altars.

"Like in an enclosed holy place, typical of the Japanese Zen gardens, the ancient eucalyptus creates a ritual area in this house, around which the facade and the whole disposition of the volumes were conceived," said Paritzki and Liani.

Eucalyptus House is the home of a couple and their four children, whose ages range between five and 18.

The house is organised over three floors, with living spaces on the ground floor and three bedrooms on the two storeys above. These floor levels are staggered, to work with a slight level change across the site. There is also a basement level, which creates separate apartments for the two oldest sons.

Although it's not immediately clear from the street, a Zen-inspired garden can be found behind the building's facade, creating a suitable amount of distance between the eucalyptus and the rooms behind it.

"The tree patio, placed between the interior of the house and the street, creates a deepness among the sections and enhances the natural ventilation," said the studio.

There are other Japanese references too, like the charred wood doors, which were created using the Japanese wood preservation technique of yakisugi.

"The Japanese aesthetic references in the project come from the clients' admiration of Japanese beauty," the architects told Dezeen.

The building's structure is concrete, which is rendered white on the exterior but left exposed in various places inside. The concrete was cast against wooden planks, leaving a wooden texture that feels fitting alongside the tree bark. 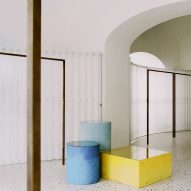 The facade also incorporates a metal screen that provides a glimpse of the courtyard garden from the street. Paritzki and Liani describe this as as a mashrabyia, a common feature in Islamic architecture.

Behind the facade, glazed walls and balustrades front both the courtyard and the rear garden, allowing plenty of light to penetrate the interior despite the lack of exterior windows.

"We use these elements as tools to create unpredictable atmospheres, with the change in daylight," added the architects.

Liani and Paritzki founded their studio in 2001. They also recently completed an interior project on the Italian island of Ischia – a boutique with a minimal interior. A previous residential project in Tel Aviv also incorporated large glazed walls.

For Eucalyptus House, the pair also designed the interiors, incorporating the clients' collection of contemporary art.