Red is the colour of choice for this compact family house on the outskirts of Barcelona, designed by local studio Arquitectura-G to sit on top of a garage.

House in Sant Antoni de Vilamajor is a 250-square-metre, single-storey home located in a village to the northeast of the city.

Red surfaces feature both inside and outside, adding colour to an otherwise simple palette of materials that includes concrete blocks, minimal glazing and clay tiles.

The Arquitectura-G team had originally planned to use green, but they ended up opting for this shade instead. It allows the building to stand out from the surrounding plants and trees, but also offers a feeling of warmth to the living spaces.

The house is divided into two zones, set at slightly different levels.

The upper level is neatly compartmentalised into a row of rooms: four bedrooms, including one en-suite, and a family bathroom. The lower level is an open-plan living room, although a toilet at the centre of the plan helps to define different spaces.

This layout came as a result of structural efficiency.

With the garage sitting directly beneath part of the building, and the other half set into the hillside, it made sense to specify a lightweight steel frame for the bedroom block and load-bearing blockwork walls for the living room block.

"The intention was not to differentiate the uses by separating the house in two zones, but to work with two different construction systems," explained Marta Alarcón, one of the architects who worked on the project. 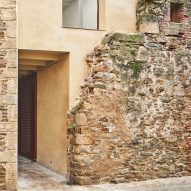 As well as bringing logic to the structure, this helps to make the living spaces feel like they merge with the sloping landscape, which was one of the clients' main requests.

"The clients wanted to have the feeling of living in a house very connected to the site," said Alarcón.

This feeling is enhanced by the zigzagging profile of the living room, which creates a row of staggered windows along the edge of the space.

There's also a hearth set into the corner of the room, framed by steps that double as seating benches, while skylights allow plenty light to filter into the living spaces.

Arquitectura-G was awarded the European Union's Emerging Architect prize back in 2015, in recognition of its innovative approach to residential architecture.

House in Sant Antoni de Vilamajor is the latest of several bespoke homes that the studio has completed in Barcelona and the surrounding region, with others including a new house built within aged stone walls and a house where furniture and flooring merge.